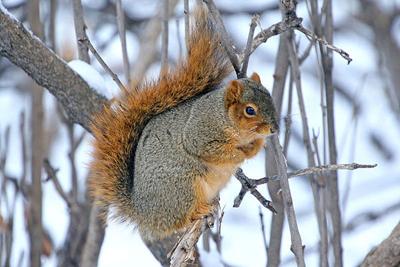 Hunting squirrels for food and sport is a tradition deeply embedded in Kentucky’s hunting culture.

In early Kentucky, squirrels were present in our woodlands in startling numbers.

Dave Baker, editor of Kentucky Afield magazine, recounted an amazing observation of squirrel abundance in an article he wrote, quoting from the memoirs of naturalist John James Audubon.

Art Lander Jr. is outdoors editor for KyForward. He is a native Kentuckian, a graduate of Western Kentucky University and a life-long hunter, angler, gardener and nature enthusiast. He has worked as a newspaper columnist, magazine journalist and author and is a former staff writer for Kentucky Afield Magazine, editor of the annual Kentucky Hunting & Trapping Guide and Kentucky Spring Hunting Guide, and co-writer of the Kentucky Afield Outdoors newspaper column.

In the article, Baker wrote that “in 1819, Audubon was on a flatboat floating down the Ohio River when he began seeing thousands of squirrels (jumping) into the water and swimming across the river into Kentucky, (first) near the present-day town of Milton, in Trimble County. The waves of squirrels continued (off and on) for some 300 miles, until the flatboat was nearly to Smithland,” at the confluence of the Cumberland River.

“The boys, along the shores and in boats were killing the squirrels with clubs in great numbers, although most of them got safe across,” wrote Audubon.

Biologists today still debate the reasons for these migrations, huge en masse movements of squirrels from their home territories, a phenomenon that hasn’t occurred often during modern times.

The gray squirrel thrived in the old-growth forests that covered about 90 percent of the state’s more than 40,000 square miles. The fox squirrel was most abundant in the rolling land of the interior, where park-like savannas stretched for miles, with clusters of huge burr oaks, walnut, hickory and blue ash trees interspersed by grasslands and stands of river cane.

In the 19th-century big game animals such as bison, elk, deer and wild turkeys began to disappear due to habitat loss and unrestricted subsistence hunting.

Squirrel was often one of the main ingredients in the popular vegetable and meat stew known as burgoo, which was slow-cooked in a big iron pot, and served with cornbread at family or community gatherings in the region. 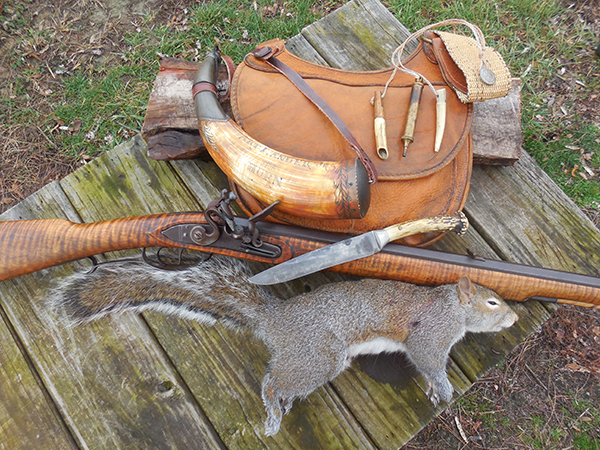 A flintlock longrifle was commonly used for squirrel in the early days of hunting. (Photo by Art Lander Jr.)

The Kentucky Rifle, a sleek, long-barreled, highly accurate flintlock muzzleloader, was ideal for the eastern frontier, more than adequate for squirrels, and any other larger game that might be encountered. It was typically .40 to .45 caliber so less lead and powder was required, which meant that the rifle was inexpensive to shoot compared to larger calibers and more ammunition could be carried afield.

The Kentucky Rifle fired lead round balls, wrapped in a greased patch, that were slightly smaller in diameter than the rifle’s bore. A hickory ramrod was used to push the ball down the barrel and seat it onto the powder.

The hunter of that era carried the rifle’s accouterments in a leather shoulder bag, and black powder was secured in horns or brass flasks. Harvested squirrels were placed in another shoulder bag, usually made from cloth, which was the origin of the modern term “bag limit.”

Shooting squirrels with a flintlock rifle demands a high degree of accuracy, and crack shots sometimes showed off their shooting skills by engaging in friendly competitions for bragging rights. 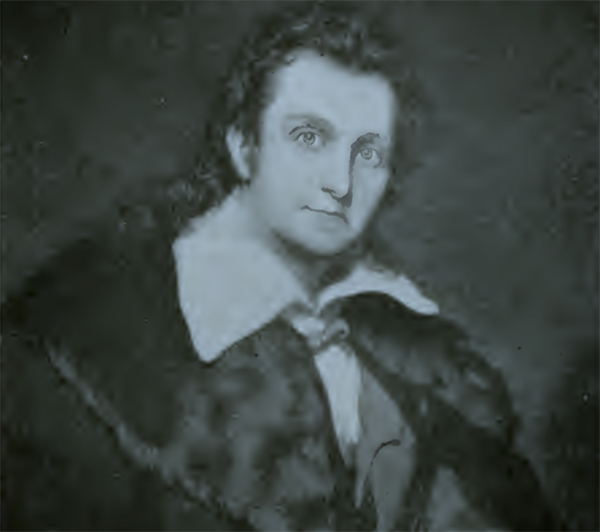 In John James Audubon, The Naturalist, a memoir edited by his widow, and published in 1870, one entry detailed a hunt in Frankfort, Kentucky, in which the celebrated frontiersman Daniel Boone demonstrated the sport of “barking squirrels.”

Audubon wrote, “We walked out together, and followed the rocky margins of the Kentucky river until we reached a piece of flat land thickly covered with black walnuts, oaks, and hickories. As the mast was a good one that year, squirrels were seen gamboling on every tree around us.

My companion, a stout, hale, and athletic man, dressed in a homespun hunting shirt, bare-legged and (in) moccasins, carried along and heavy rifle, which, as he was loading it, he said had proved efficient in all his former undertakings, and which he hoped would not fail on this occasion, as he felt proud to show me his skill. The gun was wiped, the powder measured, the ball patched with six-hundred thread linen, and the charge sent home with a hickory rod.

We moved not a step from the place, for the squirrels were so numerous that it was unnecessary to go after them. Boone pointed to one of these animals which had observed us, and was crouched on a branch about fifty paces distant, and bade me mark well the spot where the ball should hit. He raised his piece gradually until the bead (that being the name given by the Kentuckians to the sight) of the barrel was brought to a line with the spot which he intended to hit, and fired. 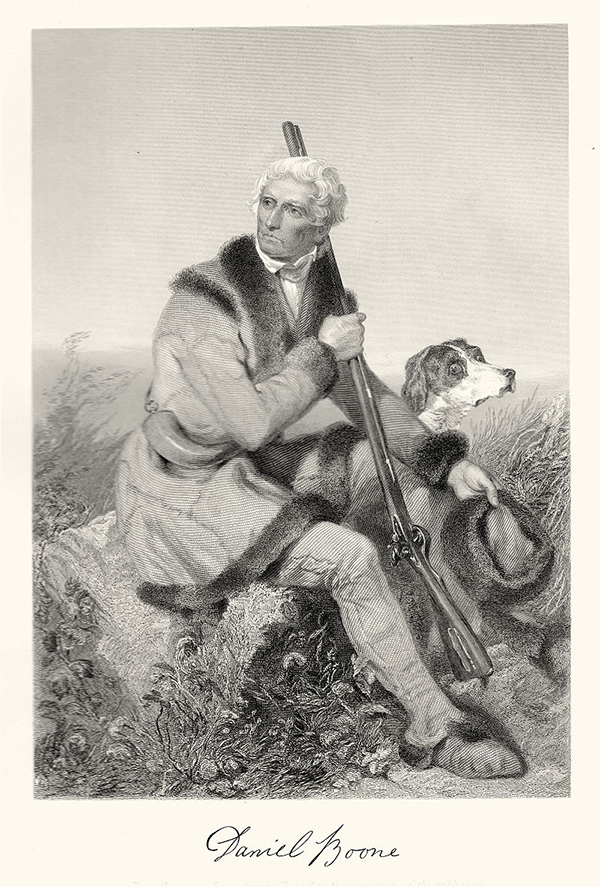 I was astounded to find that the ball had hit the piece of the bark immediately beneath the squirrel, and shivered it to splinters; the concussion it produced killed the animal, and sent it whirling through the air as if it had been blown up.”

Squirrel populations aren’t nearly as high now as they were 200 years ago.

Deforestation, and the loss of the state’s majestic chestnut trees, which fell victim to a blight in the early 1900s, have been contributing factors.

But the outlook for squirrels and squirrel hunting in Kentucky is excellent, as 46 percent of the state, or about 12 million acres, is forested, according to the Kentucky Division of Forestry. A high percentage of Kentucky’s trees are mature, in which squirrels thrive, as older trees produce the most mast (nuts).

The 2019-2020 squirrel hunting season in Kentucky is split. It opened on August 17 and ran through November 8. Three days later the season re-opened on November 11, and will continue through February 29, 2020.

Late season is a good time to hunt squirrels.

In winter, the food that squirrels are looking for is mostly on the ground. Squirrels create a cache of nuts and seeds. They go back to the nuts they have buried or stashed in tree cavities.

A proven late-season hunting strategy is to walk a while, then sit awhile, and wait for squirrels to appear. Squirrels are noisy, barking and chattering, and chasing each other, as their second breeding season is about to commence.

Shots tend to be longer, and small-caliber muzzleloaders are ideal for bagging squirrels.

Squirrel harvest drops off in the late season in part because there are fewer hunters. Years of data from the Squirrel Hunter Cooperator Survey has found that hunter effort is greatest toward the beginning of the fall season and declines as the season progresses. Most years less than five percent of squirrel hunts are held in January and even less in February.

Hunters typically observe about half as many squirrels in the late season, compared to August and September.

Squirrel hunting with a flintlock long rifle takes hunters back to the roots of hunting in Kentucky. Hunting this scrappy game animal is celebrated and revered as a symbol of our proud frontier heritage and hunting culture.