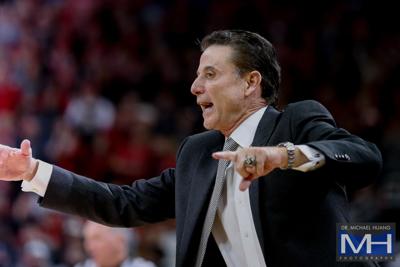 (LEXINGTON, Ky.) -- First, there was Dream Game One back in 1983. Kentucky and Louisville were playing in the NCAA Mideast Regional Final in the old Stokely Athletic Center in Knoxville. Although only 70 miles apart, the Cats and the Cards hadn’t played each other since a tournament game in 1959 and in a regular season game since back in 1922. Rumor had it that Kentucky at the time—as the flagship program in the Commonwealth—felt like they had nothing to gain by playing other in-state schools.

For those lucky enough to attend, this watershed meeting was competitive and emotionally charged. I remember Governor John Y. Brown, decked out in a custom-made sport coat—one half Wildcat blue, the other half Cardinal red, futilely playing to both sides of the fence. Fittingly, the game itself did not disappoint, as both teams battled valiantly into overtime. Unfortunately, we can’t mention the outcome here.

Then in 1986, Kentucky coach Eddie Sutton uttered the infamous words, “Louisville is like the little brother fighting for recognition from the big brother.” Upon hearing that, both fan bases go berserk as Rex Chapman pours in 26 points, big brother routs little brother 85-51, and the war of words permanently escalates. Game on!

In 2001, here comes Rick Pitino to add fuel to the fire. With a masterful stroke of irony, the man who rescued the Kentucky basketball program from destruction and shame goes Benedict Arnold and takes the head coaching position at Louisville. To this day, I still can’t understand why he did it—but it sure stoked the fires of passion between two zealous fan bases.

On the national scene, Duke/Carolina gets more publicity, but UK/UL is the best rivalry around…bar none. For the reasons stated above, Wildcat and Cardinal fans legitimately hate each other. There’s venom and vitriol everywhere you look. Without any other professional sports in the state of Kentucky, this competition naturally becomes priority number one. This time every year, Basketball Armageddon rules the Bluegrass.

Ever since Rick Pitino got the boot, however, Cats versus Cards has been lacking a punch. There’s no villain to hate, and for that reason alone, beating up on little brother just hasn’t been much fun.

But things seem ratcheted up again this year. Both Kentucky and Louisville are not only jockeying for national rankings, but both teams have been ranked No. 1 at some point earlier in the season. Delusional or not, both fan bases have their sights set on a possible national title.

The winner of this game gets a leg up on NET rankings, tournament seeding, and above all—bragging rights. After all, you can’t conquer the world if you can’t beat your neighbor.

Kentucky (8-3) comes into this contest reeling from a trip out to Las Vegas. Two straight losses have eroded expectations. Poor three-point shooting (27.8%) and lack of “fight” have been serious red flags. Truth be told, we don’t know how good or bad this team really is.

Louisville, by contrast, has been a bit of a surprise. No one thought Chris Mack’s squad would be this good this fast. The 49-year-old Mack has the Cardinals rolling again at 11-1, their only loss a 70-57 upset to Texas Tech in Madison Square Garden. Furthermore, it’s been a whopping ten days since Louisville blitzed Miami (OH), giving Mack plenty of time to plan his attack.

The Cards’ Jordan Nwora is the real deal. The 6’7” 225-lb forward leads the ACC in scoring at 21.2 points per game. With his next ten points, the preseason All-American and preseason ACC Player of the Year will become Louisville’s 69th career 1,000-point scorer. If the Cats don’t defend, he may break the scoreboard.

One Wildcat player knows how intense this rivalry can be. Redshirt freshman Zan Payne, whose father is Kentucky associate coach (and Louisville alumnus) Kenny Payne, admitted to looking ahead.

And therein lies the key. It’ll be a real home court advantage for the Cats, and for the first time this year, Rupp Arena should be packed to the rafters. Louisville can defend, but if Kentucky can get out in transition, their guard play and the energy of the crowd should be able to carry them to victory. If Louisville controls the tempo, however, it could end up getting ugly.

I’ve got a feeling Kentucky will respond. In order to right the ship, they need this game more than Louisville. I’ll take them by five in this one.

Dr. John Huang is a regular columnist for Nolan Group Media. If you enjoy his writing, you can read more at www.huangswhinings.com, www.justthecats.com, or follow him on Twitter @KYHuangs.