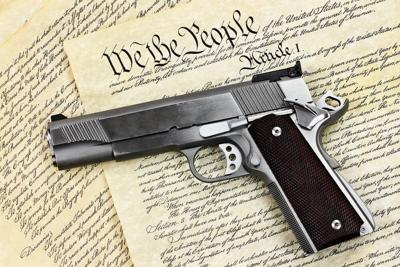 The Citizens Committee for the Right to Keep and Bear Arms today announced that Washington Free Beacon writer Stephen Gutowski is this year’s recipient of its “Bill of Rights” award.

“There is more to the Bill of Rights than the Second Amendment,” noted CCRKBA Chairman Alan Gottlieb. “There’s also a First Amendment, and Stephen Gutowski exercises and defends both on a daily basis. He represents the best in professional journalism, asking the right questions, raising the right issues and putting it all together in a way readers clearly understand the story.”

Gutowski’s reporting on firearms policy and politics has been cited in every major media outlet, and he has been a guest on Fox News’ primetime programs, and also as the cover of TIME magazine.

“Stephen has been a past speaker at the annual Gun Rights Policy Conference,” Gottlieb recalled, “and his perspectives on current news and events have invariably provided the audience with information they certainly wouldn’t get from the establishment media. He truly deserves this year’s award and we’re delighted to add his name to the list of recipients.”

Gutowski has a keen understanding of the firearms community and the issues they face, and he knows what news interests gun owners. In his spare time, he enjoys building AR-15s at home.

“I am honored to accept this award,” Gutowski said. “The Bill of Rights, perhaps more than any other founding document, sets the American experiment apart from what came before in human history. The explicit, written protection of core individual rights from the excesses of government power is what has allowed this country to develop into that shining city on a hill, that beacon of freedom envied the world over and unmatched in the sands of time. May we continue to revere and protect the liberties outlined within its margins so our children and our children's children may also live as free men and women.”