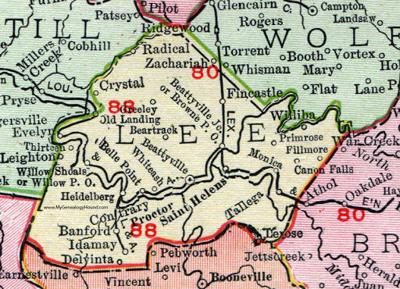 Friday dawned crisp and cold with a nice covering of snow.  What a beautiful day. Long before the sun rose, road crews were salting and scraping county and state roads. Before the weekend was over, temperatures were rising, fog and frost covered the area and the snow vanished followed by constant rain.  It proved a little challenging for us, but the rivers and creeks of Lee County pretty much stayed in their banks.  We had the normal closed roads, but nothing to compare with last year.  Our neighbors in Clay, Perry, Harland, Bell and other counties didn’t fare so well.  I would like to thank the people of Lee County who sent me messages to the email account leekyjudge@gmail.com or contacted me on Facebook  at Lee_County_Kentucky_Government to inform the county about road issues.  We can’t get to everything right now, but the road department is working to first ensure county-maintained transit roads are open then moving on to roads that terminate. It should be clear that the work done by the road department to clear culverts and ditch lines before the rain started has gone a long way toward keeping rains from impacting roads this year.  Well done everyone.

We have done some moving around and started some new procedures with the solid waste team to address some of the pick up concerns shared by Lee Countians.  Let us know how the service is doing. They do a great job and pick up around 300 cans a day from all over the county. We are always trying to improve our service.  And rain or shine, this team is on the road before the sun is up to keep the county clean. And a big congratulations to Solid Waste Coordinator, Angie Williams, who wrote a grant to clean up Dumps and just received over $14,000 for clean-up.

The Ambulance Service, after the 200 run January, has completed 54 runs so far in February.  This team is there every day when the people of Lee County need emergency medical attention. These 16 fulltime and part time professionals have administered to and/or safely transported nearly seven hundred people in crisis since October.  We keep two ambulances on call 24/7, use a third for half a day to transport non-critical patients and have had people come in to bring ambulances on line when everyone is out of the county.  This isn’t just a job to these people.  It is a calling.

There is one gentleman who works day and night in a fairly dangerous job, Emory Crawford, the animal control officer.  Since January of last year, he has transported 541 animals to the Estill County Animal Shelter, 339 dogs, 201 cats, one pig.  And let’s not forget the Animal Shelter crew in Estill County who has, for the last three years found homes for all the animals and not had to euthanize any of them.  On that note, are your animals vaccinated and kept secure?

Last week I spent three days at the Kentucky County Judge Executive Association meeting (KCJEA) and it was filled with information and opportunities to meet new members of the new Governor’s staff.  One issue resonated through the entire meeting, “Funds are going to be tight!”   There was a lot of discussion about supporting a new gas tax to get a few million into the Rural Secondary Road fund that the State uses to maintains roads like 587 and 399 and 52 in Lee County, and a few million into the County Road Aid Fund which is what the County gets each year to work on roads like Blaines Branch, Spencer Ridge, etc.  It is interesting when listening to the judge from Pike County say he has over 1200 miles of County Roads and he can only afford to blacktop 18 miles a year using County Road Aid funds.  We have to hope for Governor’s Discretionary Funds or extra Flex Funds that the State distributes to all 120 counties. I hope to find a way to salvage more County Road Aid Funds, so we can get blacktop on more roads in Lee County.

I was reminded at the meeting again, when the Kentucky Coal County numbers were published, that we are no longer a coal producing county so we no longer receive Local Government Economic Development Funds.  We currently have about $80,000 remaining from last year, but there will be no more coming in.  I am continuing to work on getting more Local Government Economic Aid Funds which are called coal impact funds, but even with the coal tipple operating, the transport of coal is on State Maintained Roads, not county roads, so there isn’t any money allotted to the County now, but we are still looking.

As I stated a few weeks ago, we were looking for Governor’s Discretionary Road Fund Money to fix the turn off Little Ross Creek to Hwy 851.  We received the funding and will be working to have it completed before the Kicking it on the Creek Festival. The road will also provide safer access to the newly reclaimed $4,000,000 Fish and Wild Life Project that put the creek back to it’s pre-industrial banks and for the four families that live on the road.  If you haven’t seen the work that has been done down there, I highly recommend you take a nice day and check it out.  It’s under water right now.

EMA Director Jon Allen is monitory the river tides and reporting regularly to Kentucky Emergency Management and working with Ms Williams to get all our FEMA money.  This week we received $7,000 to wrap up a disaster from 2016.

Don’t forget the Regularly Scheduled Fiscal Court Meeting at 6 p.m. on Thursday, February 13 on the second floor of the Court House.  There are lots of issues on the agenda and community input is always appreciated.