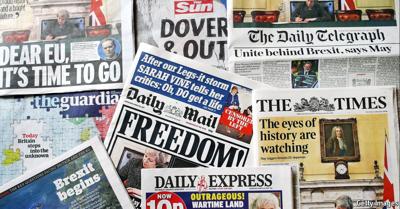 Extra! Extra! Read All About It! Words that once rang up and down the streets of small towns and big cities all across America. Long before the advent of the Internet, television, radio or even the telegraph, most people received information from newspapers. In Boston, on September 25, 1690, the “Publick Occurrences, Both Foreign and Domestick”, became the very first newspaper printed in America. Four days later, the Governor of the state demanded that the paper cease publication, stating that in the future nothing could be printed without prior authority. All because the editor, Benjamin Harris had the audacity to print about the “immoralities of the King of France”, also making it the first newspaper to be suppressed by the government.

Our Founding Fathers knew that a free press was a necessary and essential ingredient of our democracy, to be a check on the excesses of government, corruption and having the ability to speak truth to power. Thomas Jefferson said that “Freedom will be a short-lived possession unless the people are informed”. Now under the banner of papers like, The New York Times, The Washington Post, the Chicago Trubune and The San Francisco Chronicle, newspapers are woven into the very fabric that is America.

Regrettably, newspapers across the country are being faced with slashing budgets, cutting staff, filing for bankruptcy, or due to poor circulation, declining advertising revenues or hostile takeovers are shutting down completely. In the past 15 years, more than 2,000 newspapers have closed in the United States, with small and rural communities feeling the loss especially hard.

In Illinois, 157 weekly papers have closed, in New York 155, in Texas 146 and in the state of Georgia, 28 counties are now without a weekly paper. Due to the support of loyal readers and subscribers, Beattyville, Kentucky is a great example of a small town that has been able to maintain not just one, but two weekly papers. The Beattyville Enterprise, and the Three Forks Tradition have been able to keep the community informed with city council meetings, school board elections, tax increases, birthdays, invigorating opinion editorials and many other areas of local interest, providing a real community and civic service.

Kentuckians everywhere have a right to be proud of, The Lexington-Herald Leader, and the Louisville Courier-Journal, both Pulitzer Prize winning papers. There are 170 newspapers published weekly and daily in the state of Kentucky including The Harlan Enterprise, established in 1902, the Richmond Register in 1917, The Garrard Central Record in 1889, the Flemingsburg Gazette in 1880, The Winchester Sun in 1878!

I personally would like to thank every one that reads my column for the Beattyville Enterprise first published in 1883. Even during the American Revolution, newspapers felt it necessary to print both sides of an issue, so whether or not we agree or disagree, I will always respect your position. A spirited and honest exchange of ideas and opinions are all part of the tapestry that makes our country great. Walter Cronkite once said that “Freedom of the press is not just important to democracy, it is democracy”. And that's the way it is.