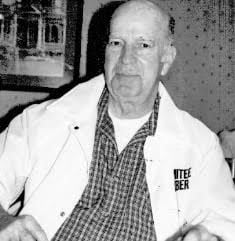 Junior was known for his kindness, generosity, and witty sense of humor. He loved his family, his pets, his lifework, his community of Beattyville, and it’s people. He spent most of his adult life as a businessman and civic leader in Beattyville, serving 33 years as a member of the Beattyville City Council. Mr. Brewer was a Navy Veteran, and member of the Proctor Masonic Lodge, Shriners, Three Forks V.F.W, and the McGuire Memorial Presbyterian Church. He was a founding member of the Lee County Woolly Worm Festival.

Junior was born on September 17, 1932 the late Ethel Pearson Brewer and Luther Carson Brewer on Sturgeon Creek in Owsley County. His family moved to Lee County in 1933 and his mother started Brewer’s Grocery on Depot Hill. Mr. Brewer began his own grocery store in 1971, Brewer’s IGA, changing it’s name to Brewer Food World later on before closing it in 2005.

Junior is preceded in death by his father, Luther Brewer and his mother Ethel Pearson Brewer.

Visitation for Junior will be at the Newnam Funeral Home on Wednesday, March 18, 2020 from 6pm to 9pm and Thursday, March 19, 2020 from 1pm to 3pm. The funeral service will be following Visitation on Thursday at 3pm., and the burial at Riverview Cemetery. In lieu of flowers, please, make donations to Compassionate Care Hospice Center of Richmond and Passionately Pink in Lee County. Newnam Funeral Home is in charge of arrangements.

To plant a tree in memory of Former Member as a living tribute, please visit Tribute Store.