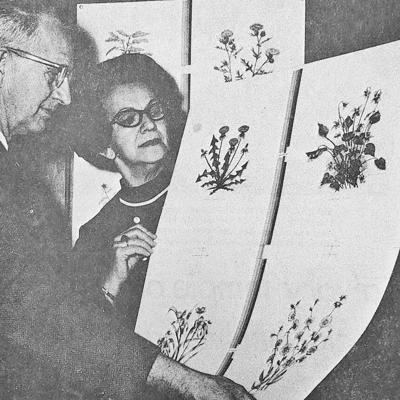 Mrs. Nellie Meadows. Wildflower artist, Clay City, KY., will be the guest of honor at the Lee County Public Library, Sunday, December 6 from 2 until 4 p.m.

The “artist party” is being hosted by the public library board and county personnel. Refreshments will be served by the Beattyville Woman’s Club.

Nellie, as she is known to her friends, has had no formal training. She started to sketch when she was only eight years old, using only a regular school pencil. Soon she started using pastels, and them oil and watercolors. According to Mrs. Meadows, she did not like watercolors at first because they were difficult to work with. She finally mastered the technique of water colors and now feels that only watercolors can catch the subtle tints of the wildflowers.

Mrs. Meadows says earlier criticism of her technique now works to her advantage in faithfully reproducing the delicate beauty that is to be found in nature.

Eight prints were reproduced for the buying public during 1969. They are: THISTLE, CATTAILS, SPIDERWORTH, CHICORY GOLDENROD, PARTRIDGE PEA, DANDELION and VIOLET. Two prints were released in August of 1970, the KENTUCKY TULIP TREE and TRUMPET CREEPER. All these prints will be on display during Mrs. Meadows’ visit.

In addition to wildflowers she paints various other subjects. One of her most striking is a Bible held in reverent hands. When asked whose hands she used as a model, she smiles and holds up her own.

She has painted portraits, horses, scenery ---even billboards. A few years ago, she designed a placement for the Region X Tourism Council of the Land of Natural Bridges and Trails. Over 375,000 copies of the placement have been used throughout the state’s tourist areas.

The still life of the Bible along with approximately 20 other original paintings will be on display in LEE COUNTY PUBLIC LIBRARY from 2 until 4 p.m.

Everyone in Lee County and surrounding counties has an invitation to attend the “artist party”. This is a rare opportunity to meet Kentucky’s wildflower artist, Mrs. Nellie Meadows.

Nevyle Shackelford, who wrote the descriptive essays for the wildflower prints, will be present for the library event.

Just 20% of Ky. adults say a health-care provider has contacted them about a Covid-19 shot; only 14% say their health insurer has