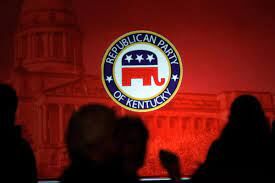 One milestone that some thought would never take place in Kentucky happened Friday morning: Republicans are now officially the majority party in the Commonwealth.

Officials with the Kentucky State Board of Elections announced the number of registered Republican voters stands at 1,612,060, compared to 1,609,569 registered Democrats, giving the GOP a voter registration advantage of 2,491 voters.

Secretary of State Michael Adams, who is again the chair of the Board of Elections, released a statement about the switch.

“After a century and a half, the birthplace of Lincoln has finally aligned with the party of Lincoln. Today is a grand day for all of us in the Grand Old Party who have worked so hard for so long to advance our goals of limited government and personal responsibility.

Registered Republicans, however, are a plurality, not a majority. To win statewide elections, and then to govern effectively, Republican candidates must appeal beyond our base to the 55% of voters who are not Republicans.”

For historical context, when Senator Mitch McConnell was first elected to the United States Senate in 1984, the state had 1.3 million registered Democrat voters, compared to just 525,060 Republicans.

“Today is a day I never thought would happen. After decades of hard work and grassroots efforts across the Commonwealth, registered Republicans now outnumber registered Democrats in Kentucky. Congratulations to all my fellow Republicans who have worked so hard and so long to make this historic day possible. This is great news for the Commonwealth but it’s just the beginning.”

“Today is a historic moment for the Commonwealth of Kentucky. I remember the days when Republicans were the minority party in the General Assembly and dreamed of being the majority party. Now, we have supermajorities in both chambers and continue to grow. I join all my fellow Republicans in celebrating this important milestone as Kentucky voters have voted with their feet and embraced our agenda and our party.”