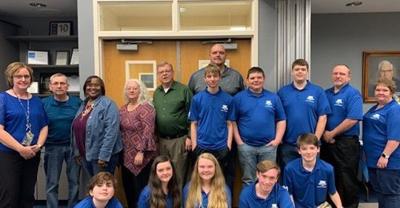 Also in attendance at said meeting was Dwight Salsbury of Ross Sinclair and Associates. Salsbury assisted the board in adopting a resolution to refinance series 2010 bonds in order to refund and retire all outstanding Lee County School District Finance Corp. School Building Revenue Bonds. On the Financial Report given by Tina Lucas, it was stated that the Expenditures for the month of February 2020 were approximately $523k (+) and revenue for the month of February 2020 was approximately $477k (+). Lucas stated that the reason for the expenditures exceeding the revenue was due to a recent $15k diesel order and also a bond payment.

Superintendent Wasson has recently been updating the Salary Schedule for the 2020-21 school year. Few changes were made however, the school nurse salary was increased due to the current salary remaining the same for the last twenty years. Wasson did not state the dollar amount at which it was changed. Substitute teacher’s pay remained the same with the exception of when/if a sub is filling in for an extended amount of time for the same teacher, the pay is increased. Also, the ESports Coach’s salary was added to the schedule due to this being the first year that the ESports Program is being offered.

Wasson and the board then approved and awarded the following bids: The propane bid for the 2021 year was awarded to Ferrell Gas which will save the school eight cents per gallon. The bid for the diesel fuel and lubricants was awarded to KY Petroleum however, only the diesel bid was accepted with the lubricants bid rejected. The reason for the rejection of the lubricants bid along with diesel exhaust fluids according to Wasson, was because it is a lower price to only accept the bids on these items at an as needed basis. The awarded bid for the Student Accident Insurance was to Roberts Insurance and Investments. Lastly, the awarded bid for an Agent of Record Services was awarded to Curneal Hignite.

A motion to change/update the volunteer policy was passed and will now require school volunteers to pay for their own background checks unless there is a circumstance where the school feels obligated to pay the fee. Also, when a volunteer is not active for a period of time, a new background check will be required before they may return.

The district wide attendance percentage as of March 10th was 88%.

The next Lee County School Board meeting will be held on April 14th 2020 at the Lee County Board of Education. All meetings are held the second Tuesday of each month at 6pm. Meetings are open to the public/parents to attend or express their concerns. A copy of the March 2020’s agenda can be found on the school’s webpage along with other past meeting’s agendas at lee.k12.ky.us.

Angel Road gets OK for repairs

Mayors sign emergency declarations for both Pineville and Middlesboro