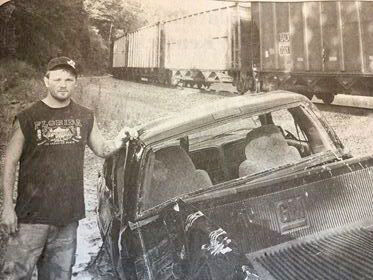 Donald “Donnie” Smith described it this way. Elizabeth Back 25 of Hazard, was crossing the railroad track at C.Drake Road on Sunday afternoon. An eastbound CSX train, traveling about 30 miles per hour, hit the 2001 GMC Sonoma just behind the cab.

The truck went airborne then landed on it’s right side. “The truck was still rocking when I got there. There was blood everywhere” said Smith. He said he turned off the engine, unbuckled Back and pulled her out and away from the truck.

“She was gurgling”, he said as apparently blood from a gash behind her left ear was drained into her mouth. His father Donald Ray Smith called 911.

In the meantime, the younger Smith tried to keep Back alert. “She could not talk, I tried to to keep taking to her asking if she knew me and where she was. She nodded her head”, said Smith.

In addition to the laceration, Smith said he thought that Back may have suffered a broken shoulder. The Lee Co. ambulance transported her to St. Helens where she was airlifted to Lexington. She is listed in fair condition.

“I guess I saved her life. I don’t know”, said Smith. Smith said that he was breaking a horse for Back and was waiting for her. He said the train engineer blew the horn one time before it got to the intersection. He also said that he, himself has almost been hit by a train at the exact location. He said he and some of the neighbors have asked CSX to put arms on the crossing but they had no success.

According to the Hazard Herald, Back operates an animal grooming business in Hazard. The accident occurred at 4:45pm.

The next day, Monday, a westbound train hit a pickup truck at the same crossing.

The 1990 Ford F-150 pulling a horse trailer had become stuck on the tracks. The driver, 82 year old Junior Cole of Booneville had already gotten out of the truck and avoided injuries. KSP is investigating both accidents.