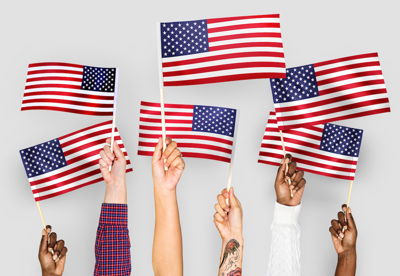 From the magical fantasy land of Orlando, Florida, home to Cinderella's Castle, Donald Trump has announced his candidacy for a second term as President of the United States. Echoing through the World of Harry Potter and the Forbidden Forest, our very own Little Emperor is once more beating the drums of war along the campaign trail. A modern day call to arms, designed to gather the faithful and to strike fear into the hearts of Democrats everywhere.

Like a mystical shapeshifter, Trump transforms himself into a Shaman, stirring a smoldering, gurgling cauldron of political rhetoric. A caustic brew of hate and anger, where fears are exploited and the lines of division are drawn. A child tyrant with an exaggerated perception of his own self-worth, where the world revolves around Donald Trump. His vocal incantations creates a trance where his followers are mesmerized chanting in unison, “build the wall, lock her up, drain the swamp and fake news”.

Donald Trump continues to preach only to the converted, with a form of “base” tribalism, uninterested in being President to all the people. Trump has repeatedly called the Democratic Party, treasonous and un-American, a wacko mob that has gone crazy, out to destroy the country. This form of chaotic governance, this perpetual turmoil has become an exercise in dysfunction. Trump's malignant behavior and unrestrained lack of morality, his attacks against long standing American allies, the undermining of the F.B.I., the C.I.A. and the Department of Justice has caused an erosion of trust around the world.

I heard it through the Kudzu vine that many conservative Republicans are dismayed about the way that Democrats have maligned and vilified President Trump. So, in the name of being fair and balanced, here are just a few more of my favorite unflattering comments about Donald Trump.
“He is not qualified to be President of the United States, he is a little bit of a maniac, we need a Commander-in-Chief not a Twitterer-in-Chief”: Republican Senator Ted Cruz.
“Trump is a phoney and a fraud, his promises are worthless, I'm sickened by the dishonesty of President Trump”: Republican Senator Mitt Romney.
“Trump is a barking carnival act, a toxic mix of demagoguery and nonsense, He is a cancer on Conservatism that must be diagnosed, excised and discarded”: Republican Secretary of Energy, Rick Perry.
“Donald Trump is a pathological liar, a race-baiting xenophobic bigot, a crazy kook, a salesman of fear, the world's biggest jackass, the Islamic State's “Man of the Year”, not fit to be President of the United States”: Republican Senator from South Carolina, Lindsey Graham.

I would call that a ringing endorsement for our next Democratic President in 2020, whoever he or she may be!

Hasty allegedly wanted to kill 'somebody'