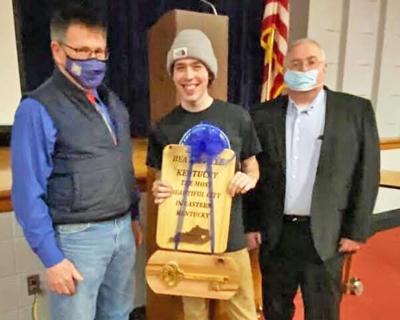 Ashton Gleckman, the young filmmaker that came to Beattyville last year to film his documentary, “The Hills I Call Home”, hosted a private viewing of the documentary in Beattyville this past Saturday.

As a Beattyville native, and a typical Kentuckian, I am not going to lie, my hackles were up, especially when my uncle was in the film, because the world generally likes to bully and make fun of our Appalachian demographic, and I am pretty protective of my family and this town, but this was before the showing of the film. My protective attitude did not last long though when I saw who and what he had chosen to put into the film. The hackles went down fast, and my heart began to swell. I was so proud of the people of Lee County! I had tears of joy and happiness in my eyes by the time the film ended. Ashton did not portray us as being backward Hillbillies, but as some pretty enlightened people who just love Lee County, because it is home. For some, it has been home for generations.

On his Facebook page, Ashton says, “I am beyond humbled and excited to share the news that my second documentary feature film, ‘The Hills I Call Home’, has secured international distribution with Gravitas Ventures and will be releasing worldwide on March 23rd! The film as well as the soundtrack will be available on iTunes, Amazon, Google Play, and most other platforms.

I am immensely excited and grateful for this amazing opportunity. Thank you so much to everyone who has helped on this journey including the cast, crew, our distributors, and producing team.”

Be sure to look for “The Hills I Call Home” on March 23rd by the kind and talented Ashton Gleckman, and watch it!!! I bet you will cry some tears of joy and your heart will swell with pride too!