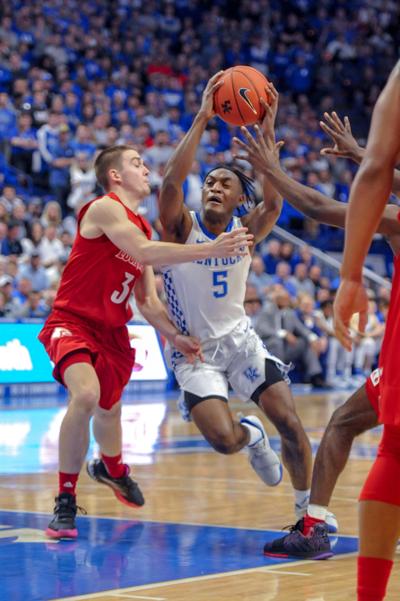 Little brothers continually crave recognition from their more established sibling.  In accordance, a stark realization has materialized for Louisville’s fan base over the years—once a little brother, always a little brother.  No. 19 Kentucky outlasted in-state rival Louisville, 78-70, winning the ‘Battle of the Bluegrass’ in an overtime thriller at Rupp.  With the win, the ‘Cats improved to 11-2 (6-0 at home) versus the Cards during the Calipari era.

Regarded as one of the most heated and eagerly anticipated matchups in all of college sports, Kentucky-Louisville transcends rivalry.  Legions of antagonistic fans strongly dislike one another.  Both programs possess storied backgrounds, but Kentucky’s unparalleled tradition coupled with their championship pedigree classifies them as the lone “blue blood” of the pair—leaving Louisville fans seeing red.  Little brothers—can’t live with them, can’t live without them.

Across the board, it’s simple—you either bleed blue or you bleed red.  UK’s lopsided dominance against the Cards includes consecutive blowouts by embarrassing margins.  Did Louisville’s valiant effort in a losing cause ignite false hope?  Maybe.  Currently, the ‘Cats hold a commanding 37-16 series advantage, winning seven of the past eight games.  And unlike Duke-North Carolina, the ‘Cats and Cards actually play one another in the NCAA Tournament.

Rivalry games bring out the best in everyone, including fans.  When a big game comes to town, Kentucky’s much maligned home-court advantage rarely disappoints.  Saturday’s electric crowd reached near ear-shattering decibels.  “At times, I couldn’t even hear Coach Cal,” Tyrese Maxey told me.  “I was looking at him and thank God we had hand signals because I didn’t hear anything he was saying because the crowd was so loud.”

Third-ranked Louisville provided a quality challenge which bolstered the ‘Cats’ resume.  “Oh man, this is really going to help us in March,” Maxey assured me.  “I mean, to be able to go down in overtime, they hit the first bucket, and still rally to win the game.”  Maxey led the ‘Cats with 27-points and grabbed 7 rebounds.  For the game, the Cards shot an abysmal 35.5% and the ‘Cats turned defense into instant offense, scoring 20-points off transition baskets.

Despite recent struggles, Maxey remains optimistic about his ability to score the ball.  “Last time I talked to the media, I told you I was not going to stop shooting,” Maxey reaffirmed.  “I believe in myself.  I put the work and time in.  If I keep doing that, the shot is going to fall and it fell tonight.”  Maxey’s big night helped the ‘Cats overcome Calpari’s ill-advised coaching box violation which resulted in a rare make from the line by Louisville during regulation.

Surprisingly enough, especially for a Calipari coached team, the ‘Cats basically won the game at the free-throw line.  Ranked 13th nationally, the Wildcats converted 21-of-25 attempts compared to Louisville’s dismal 9-for-20 effort.  Immanuel Quickley, who scored 18-points, shot a perfect 8-for-8.  None were more clutch, however, than the go-ahead free-throws Nick Richards drained in overtime.  In perhaps his best game as a Wildcat, Richards’ confidence soared.

“Demonstrated performance is how you build your own confidence,” Calipari said.  “If you build your own confidence, no one can take it away except you.”  Nick Richards finally had a breakthrough game against a quality opponent.  Richards recorded a double-double with 13-points and 10 boards.  After re-entering the game at the 8:53 mark with 4 fouls, Richards maneuvered his way throughout the remainder of the contest without committing another foul.

Ultimately, the ‘Cats embodied the older sibling, relegating the upstart Cards back to their proverbial “little brother” status.  Hagans’ steal and exclamation dunk at the conclusion along with Richards and Quickley unabashedly flashing L’s down afterward only adds more fuel to the fire.  The Cards hit a home run when they lured Chris Mack away from Xavier, but at some point, doesn’t Louisville have to win a game for it to truly be considered a rivalry?