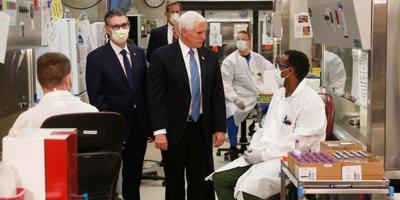 Vice-President Mike Pence recently visited the Mayo Clinic, and in the long Republican tradition of “Do as I say and not as I do”, Li’l Mikey refused to wear a face mask in spite of all safety protocol. Mr. Pence and his entourage of staff, handlers and reporters were notified the day before of the Mayo’s strict face mask policy, everyone complied except for you know who. It’s hard to believe that the head of the Covid-19 Task Force would need any such reminder, after all this is part of the same guidelines set forth by the White House.

The Second-Lady, Karen Pence, “AKA, Mother” said that Mike didn’t know that the Mayo Clinic required a face mask, contradicting Mike’s claim that he wanted to be able to look the researchers in the eye and say ‘thank you’. Apparently, Mike confused a face mask with a blindfold, oh well, so much for setting a good example. Just one more reminder that the rules don’t apply to the Trump Administration.

So, let’s take a look at Li’l Mikey’s report card: I didn’t want to wear a mask, (refuses to follow instructions), I didn’t feel it was necessary, (the dog ate my homework), I didn’t know I needed one, (refuses to accept responsibility), no one told me I should wear one, (dishonesty, lacks maturity)...Teacher’s comments: Needs improvement in all areas. Now finally, after two weeks of denials, blaming reporters for just doing their job, being angry at Fake News, Vice-President Mike Pence, acknowledges that yes, he willfully ignored safety guidelines by not wearing a face mask at the Mayo Clinic. Mr. Pence, why the lying when the truth would’ve been so much handier? Remember, whoever is faithful with little, is also faithful with much, and one who is dishonest with little is also dishonest with much. But, for coming clean in the end, let me be the first to give Mike Pence credit, where credit is due.

There are those that feel Trump only put Pence in charge of the Corona Task Force as a scape goat, to be thrown under the bus just in case things go wrong. There’s also starting to be whispers within the GOP that it may be a wise strategic move for Trump to drop Pence from the 2020 Presidential ticket in favor of a woman. There are a number of highly qualified Republican women that may be under consideration, such as, former New Hampshire Senator Kelly Ayotte, Marsha Blackburn, Senator from Tennessee, or even Liz Cheney a U.S. Representative from the great state of Wyoming and daughter of former Vice-President Dick Cheney. But at the very top of that list is Nikki Haley, a woman with impeccable credentials, as a former state legislator, former Governor of South Carolina, and United States Ambassador to the United Nations. Trump had this to say: “Nikki Haley is a friend of mine, she endorsed me with the most beautiful endorsement you’ve ever heard and she did a great job as the U.N. Ambassador”.

Trump is smart enough to realize that increasing his support among suburban women voters is crucial for any hope of a second term in 2020. Should Mike Pence be worried about a V.P. replacement, I don’t know, but let’s face it, the only person that Trump has ever sworn a loyalty oath to is...Donald Trump.

Why wear a mask when you go out in public? Because you may have the coronavirus and it's contagious