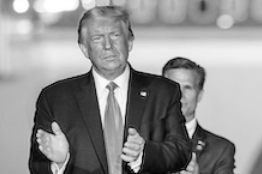 I Didn’t Vote For Trump In 2016, But I’d Crawl Over Broken Glass To Vote For Him Now. I don’t care about the tone of his tweets nor if his opponents think he’s rude. I’ve seen that he is a patriot who genuinely loves the United States of America and its people. Even though I had voted for every Republican presidential candidate since 1980, I didn’t vote for Donald Trump in 2016. Many Republican nominees had been huge disappointments to me, and I wasn’t going to vote for yet another GOP candidate I thought would betray my trust. I couldn’t imagine Trump as a genuine conservative who would champion limited government, respect individual freedom and liberty, and protect the unborn — but was I ever wrong. Although I didn’t vote for Trump in 2016, I would crawl over broken glass to vote for him in 2020.

In 2016, I was convinced Trump was just another New York liberal. On election night, however, I smiled. I was happy that at least Hillary Clinton wouldn’t be president, and I suspected that the next four years with Trump would at least be entertaining. The primary reason I didn’t vote for Trump in 2016 was that I didn’t believe him. I didn’t trust that he would be pro-life, a non-negotiable issue for me. His bluster and bravado didn’t appeal to me. I took him literally but not seriously, in contrast to his supporters who took him seriously but not literally (credit to Peter Thiel for identifying this significant distinction).By the time Trump took office, I was willing to give him a chance. He was the president, after all, and deserved the opportunity to prove himself. During the first year of his presidency, I was impressed by his commitment to keeping his campaign promises, unlike most politicians. By the end of 2017, I classified myself as a Trump supporter because of what he had already done as president.

Trump’s list of first-term accomplishments has been truly impressive: Building the strongest U.S. economy in my lifetime through historic business and personal tax cuts, resulting in millions of jobs created and record-low unemployment. Cutting federal government regulations that had a stranglehold on American business innovators and entrepreneurs. Confronting China’s trade abuses and negotiating fair trade deals with Canada, Mexico, South Korea, and Japan. Eliminating the Obamacare individual mandate. Rebuilding our military through investments in our defense capabilities as well as securing the largest military pay raise in a decade. Nominating and confirming more solid conservative circuit court judges than any other first-term administration. Nominating and fighting for the confirmation of two originalists, Justices Neil Gorsuch and Brett Kavanaugh, to the Supreme Court and then nominating Amy Coney Barrett to fill the vacancy left by the late Justice Ruth Bader Ginsburg. Moving the U.S. Embassy in Israel to Jerusalem and then brokering the Abraham Accords peace deal between Israel, the United Arab Emirates, and Bahrain. Consistently fighting Democrats to build the wall to secure our southern border, reinforcing and repairing hundreds of miles, with more construction on the way. This is just a brief summary of the Trump administration’s accomplishments. In addition, Trump has been the most pro-life president in U.S. history. He has promoted a culture of life in his domestic policies, by supporting pro-life pregnancy centers, creating the Conscience and Religious Freedom Division, supporting health workers’ conscience rights, and working to defund Planned Parenthood.

The Trump administration’s accomplishments have been in spite of relentless, daily attacks by the mainstream media, which act as the Pravda-like arm of the Democratic Party. Trump Derangement Syndrome is evident every day on television and online. As president, Trump has largely kept his promises and fought against relentless opposition. I don’t care about the tone of his tweets nor if his opponents think he’s rude. I’ve seen that he is a patriot who genuinely loves the United States of America and its people. I misjudged Trump in 2016, but I will do everything I can to see that he is re-elected in 2020 — and I’m sure I’m not the only one.