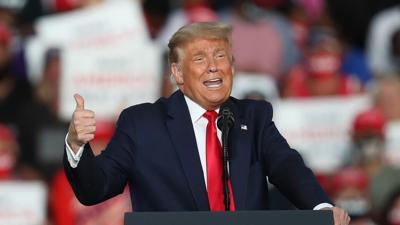 The striking contrast between Donald Trump and Joe Biden could not have been more revealing than in Thursday night’s historic dueling televised Town Hall. With moderator George Stephanopoulos fielding the questions, Joe Biden’s personal interaction with the audience harkened back to a bygone era of decency and civility. Meanwhile Donald Trump was combative and argumentative, spouting conspiracy theories and false accusations, and much to his dismay, he was fact checked 45 times by moderator Savannah Guthrie.Sadly after 9 months, the U.S. still leads the world in the number of Covid-19 cases at 8.1 million and a heartbreaking 220,000 deaths.

Yet Donald Trump continues to say that he’s done an amazing job in controlling the pandemic and we are rounding the corner! India with a population of more than 1.7 billion people is a distant second with 115,000 deaths and amazingly Taiwan which is less than 100 miles away from China (the epicenter of the Covid out- break), has suffered only 7 deaths. Donald Trump’s steadfast refusal to heed the advice of anyone other than himself, turning his back on Dr. Anthony Fauci, undermining epidemiologist, and science experts in the field of infectious disease and viral pandemics, has brought us to an unforgivable and catastrophic failure of leadership.

The television ratings for both Town Hall meetings were good but not overwhelming, Joe Biden at ABC had a viewership of 14.1 million, over at NBC, Donald Trump had 13.5 million. Even after all the hype, 54% of all registered voters still refused to watch either broadcast. If we break down that number even more we find that a shameful 48% of Democrats, 55% of Republicans and 62% of Independent voters had little interest in hearing from the candidates.

According to the Census Bureau there are about 250 million Americans that are eligible to vote, yet only 156 million are registered and less than 138 million actually voted!

The United States is the greatest Democracy in the history of the world, yet 112 million people, almost half of the voting population, never bother to vote. Compared to other developed Nations around the world, the U.S. is ranked 26th with a 55% voter turnout. Belgium ranks number one at 87.7% followed by Sweden at 82.6%, even Estonia at 56.8% is ranked higher than the United States!

In other news, if Amy Coney Barrett is confirmed there will be six Catholics serving on the Supreme Court. Now please don’t get me wrong, I believe the Catholic faith is a great, time honored and respected religion, in fact some of my best friends are Catholic, and I’m a huge fan of Pope Francis. But considering there are more than 310 religions and denominations in the U.S. maybe we could mix it up just a little. We don’t have to go too extreme, but would it hurt to have maybe a good Southern Baptist or Methodist on the court? Or how about a Holy Rolling Pentecostal, that should really liven things up!

I would like to advise everyone, to become a more informed voter, Democrats, Republicans and Independents (I hear there’s good people on all sides) could learn a lot just by reading the transcripts from the first Presidential Debate and the Town Hall meetings. In 1796 John Adams defeated Thomas Jefferson by 3 votes to become the second President of the United States, now in less than 2 weeks our Nation will be electing a new President, so remember every vote counts. Please stay safe my friends.