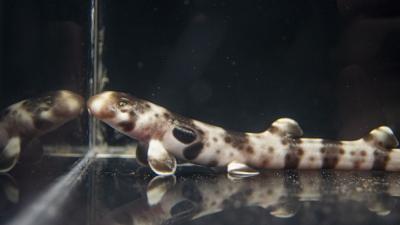 Chattanooga, Tenn. (July 31, 2019) – In a fittingly jaw-some turn of events at the height of Shark Week frenzy, the Tennessee Aquarium hatched a baby female Epaulette Shark earlier this week.

Measuring just a handful of inches long, this tiny, striped shark emerged sometime between Monday evening and Tuesday morning from a leathery egg pouch laid earlier this spring by one of the Aquarium’s six adult Epaulette Sharks.

The baby shark’s arrival conveniently dovetails with a time when attention on these oceanic predators is at fever pitch thanks to the annual Shark Week celebration (July 28-Aug. 3). Generally maligned by the public due to aggressive misrepresentations in pop culture, sharks are experiencing an unexpected boom in popularity and affection thanks in part to the children’s music video “Baby Shark Dance,” which has been watched more than 3.1 billion times on YouTube.

Given their historic reputation as villains of the ocean, it’s worth seizing any opportunity to present sharks in a better light, particularly to the open minds of younger viewers, says Thom Demas, the Aquarium’s director of aquatic collection.

“That’s one of the things we try to think about,” Demas says. “If you can get somebody comfortable with something at a young age, then it can really make a difference in the long run. I think the Baby Shark thing has helped a lot.”

Epaulette Sharks are also known as “walking sharks” for their ability to “stroll” along the seabed or overland between shallow pools by wriggling their body and perching on the tips of their pectoral fins.  Almost immediately after its emergence from its egg pouch — also known as a “mermaid’s purse” — the baby Epaulette shark began living up to its species nickname by walking, and occasionally gliding, along the bottom of the acrylic holding tank where it currently resides.

Guests can see and touch these sleek, diminutive sharks — as well as Coral Catsharks and Horn Sharks — in the Ocean Journey building’s Stingray Bay touch tank.

The Tennessee Aquarium has a successful history of raising Epaulette Sharks. This species is a prolific breeder and egg layer, with females producing an average of two eggs every two weeks. Between 2012 and 2015, Senior Aquarist Kyle McPheeters raised about 90 Epaulettes, most of which were sent to other aquariums around the country that expressed interest in exhibiting them.

“Epaulette Sharks are way cool,” McPheeters says. “They’re what got me excited about raising baby sharks to begin with. It’s nice to have one again, and we’ll be able to send it to another aquarium pretty easily when it’s older.”

Members of the Aquarium who want to cap off their Shark Week celebration in style can visit the Aquarium’s Epaulette Sharks, Coral Catsharks, Horn Sharks, Sandbar Sharks and Sand Tiger Sharks during the after-hours, SharkFest! celebration on Friday, Aug. 2. From 5-8 p.m., guests can enjoy a special shark-themed treat from Clumpie’s Ice Cream, get their hair done in a fin-tastic ’do, look at a jawsome collection of megalodon teeth and take part in an array of other fun, family-friendly activities.

Additional information about SharkFest! can be found online at community.tnaqua.org/events/2019-member-events/q3/sharkfest-2019

Arrest made in Binanza burglary