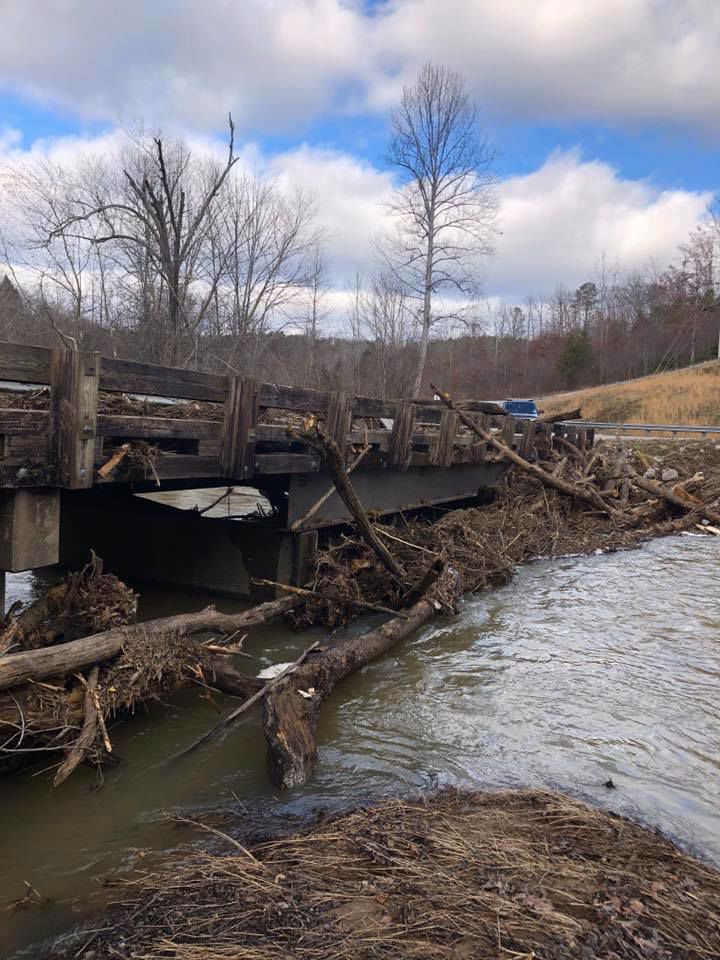 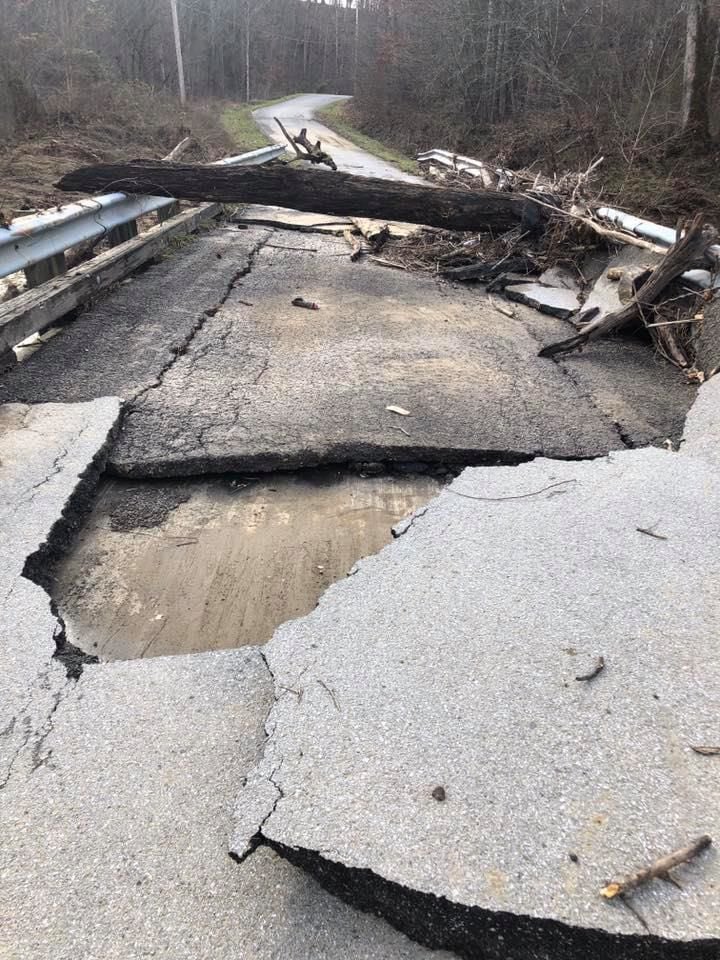 Eberle Road in Letterbox and the bridge connecting Jackson and Laurel Counties was temporarily closed for several days due to flooding last Sunday night (December 29, 2019). Jackson County Judge Executive Shane Gabbard posted pictures on Facebook showing the flood damage to the bridge over the Rockcastle River. This bridge serves an important function connecting people and properties between the two counties. Judge Gabbard reported, “The gentleman that was here just a few minutes ago, he’s a farm just on the other side of the river and then over to get over there, he’s going to have to drive 80 miles out of the way with his tractor to get over there because of this bridge being out.”

This is not the first time the river flooded in this area. “In 2019 we’ve had a little over $1 million worth of damage just from flooding on our county roads, Kentucky’s county roads, we’ve been working with FEMA all year,” Gabbard explained.

Jackson County’s repair budget is almost maxed out. County officials are now calling in state officials to see if the beams and structure of the bridge need repairs. “That’s something that we’re going to try to let the state engineer in department to figure out what’s the best solution for the problem that we got,” said Gabbard.

State Representative Robert Goforth was instrumental in getting state personnel to promptly tend to the issue. Rep. Goforth reported, “Transportation Deputy Secretary Mike Hancock and staff came down last Thursday to assess the damage. The bridge is scheduled for rebuild in 2023 but the Deputy Secretary is working to move the rebuild date up. He has followed up with Transportation District Engineer Mike Calebs and they are working on a plan.”

Judge Gabbard reported, “Representative Goforth called me Wednesday night to let me know he had reach out to Transportation Officials in Frankfort and that they would be on-site Thursday morning to look at the bridge. I then called Laurel County Judge Executive David Westerfield to inform him of the meeting and he met us with his officials Thursday morning at the Eberle bridge. This bridge is an important piece of infrastructure for Jackson and Laurel Counties as it spans across the Rockcastle River and joins Laurel and Jackson Counties and serves as a main route for many in that area. After inspection of the main structure State Transportation inspectors deemed the bridge to be structurally sound. Laurel and Jackson County road crews then began clean up and minor deck repairs to get the bridge passable. State Transportation Officials also discussed with us the future of the bridge. Myself and Laurel County Judge Executive David Westerfield both expressed our concerns about the age and the problems we are having with this bridge and asked for it to be addressed. Representative Goforth was at the meeting with us and is going to follow up with State Officials and see what the time line of a possible complete bridge replacement would be. The Eberle Bridge is part of the Bridging Kentucky Program that was started a few years ago to address aging bridges in Kentucky but was not scheduled to be looked at until 2021. Hopefully now since Transportation Officials have looked firsthand at the problems we are having with this bridge it can be moved up in that time line. We are going to stay on top of this issue but do ask that citizens who use the bridge daily keep us informed on any issues that may arise with it.”