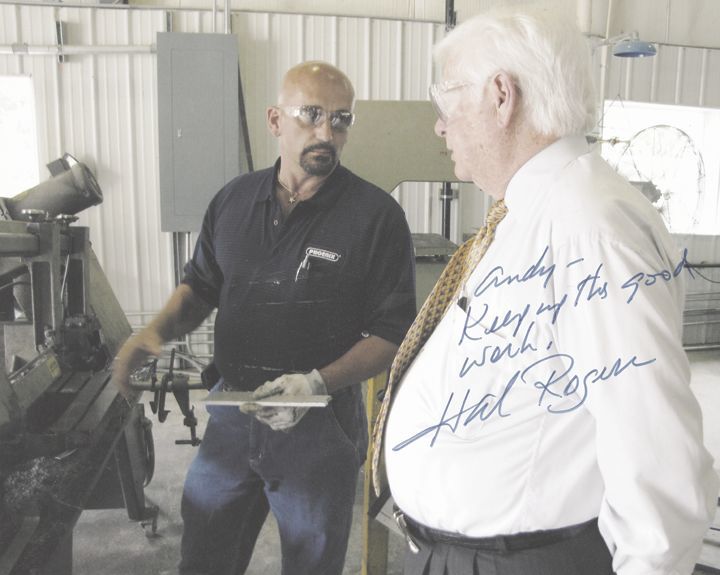 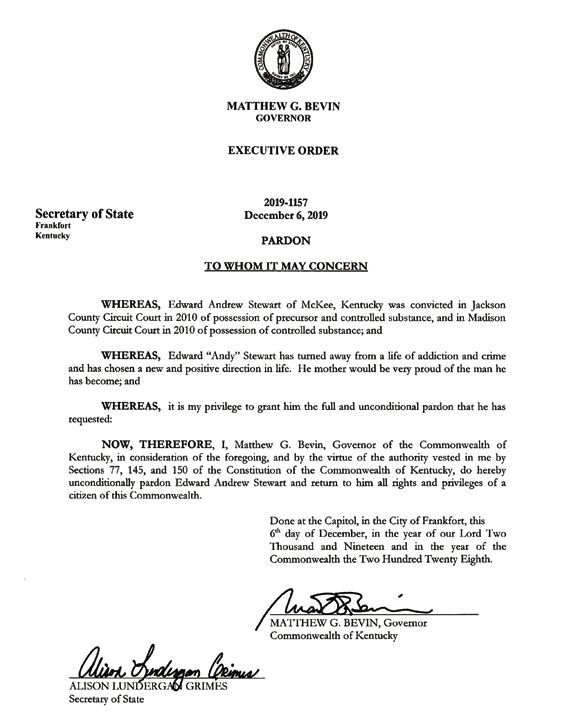 Andy Stewart was given a full, unconditional pardon by Governor Matt Bevin prior to leaving office

This week we continue our series of articles that allows us to express recognition and support for those that have worked hard to overcome difficulty and become better people. It is a new year…a new beginning. This time of year is characterized by New Year’s Resolutions. After all who among us hasn’t found themselves needing a fresh start. There are three members of our community that made their way through a dark period and have dedicated themselves to a fresh start. Their new start required lots of dedication, commitment and hard work. They have every reason to be proud of their accomplishments and every reason to be optimistic about the new year and the future. The community should also be proud of their accomplishments as well.

As part of his some of his last official acts, Governor Matt Bevin issued 428 pardons and commutations. Several of these pardons were controversial making the news and attracting scrutiny. However, most of the pardons issued by the former Governor were not controversial at all. A great deal of the pardons issued were earned by the recipients through years of hard work and dedication toward turning their lives around. Unfortunately, the news cycle tends to focus on the sensational and the negative. In fairness, time should be spent addressing those people that honestly turned their lives around and earned themselves a second chance. Among those that did just that, (earning full, unconditional pardons from the former Governor) were three Jackson County residents: Edison Lee Witt, 42, of McKee, Ky, Edward Andrew “Andy” Stewart, 53, of McKee, KY and James “Brandon” Harrison, 48 of McKee, KY. All three of these individuals made mistakes and were convicted of crimes. However, they were each strong enough to not let that be the end. Through strength and determination they each found their way back to functional, healthy lives. They have every reason to be proud of their accomplishments. Over the next few weeks each of these individuals will be celebrated for turning their lives around. Maybe their experiences will help the next person that finds themselves in a dark place find the strength to do the same.

This week we will focus on Edward Andrew “Andy” Stewart.

On December 06, 2019 former Governor Matt Bevin issued Executive Order 2019-1157 that granted Edward Andrew Stewart a full and unconditional pardon. In the text of the pardon Governor Bevin wrote: “Edward “Andy” Stewart has turned away from a life of addiction and crime and has chosen a new and positive direction in life. [His] mother would be very proud of the man he has become.”

Since Andy’s conviction and incarceration he has worked diligently to turn his life around. Andy earned his Certificate of Completion in the Jackson County Detention Center Substance Abuse Recovery Group and successful completion of the Hazelton Community Corrections Project Workbooks in 2009. He also was successful in completing Phases I, II, and III of the Kentucky Drug Court in May 2012 ( a process that took several years of dedication and commitment to complete requiring counseling, frequent drug testing, mandatory attendance to A.A. and N.A. meetings and demonstrating that they were learning how to deal with drug addiction. The participants are also required to either work, attend school or perform community service throughout the program). Judge Oscar Gayle House introduced Andy at a drug court graduation (where Andy gave the invocation and benediction for the ceremony) as “a man I wouldn’t take a million dollars for today but wouldn’t have given a quarter for him 2 years ago.”

Andy’s efforts have not gone unnoticed or unappreciated by our local community leaders either. Sheriff Paul Hays commented on Andy’s pardon saying, “No one wants to grow up to be a drug addict. It is easy to become hooked, but it is really difficult to stop once one starts. Recently Andy Stewart received a well-deserved Governor’s pardon. Andy successfully completed Drug Court after pleading to his criminal charges. He owns his home, works every day and is a leader at his church. Andy would tell anyone who asks, God changed his life. I am so proud to call Andy Stewart my friend. He is an excellent example for others to follow. People can change!”

Jailer Brian Gabbard remarked, “During the last 10 years Andy Stewart has worked hard to rebuild his life and the respect of this community, I believe he has succeeded in this. Andy gave his life to God and followed where God leads him. In this time I have personally witnessed Andy helping others who have struggled with drugs by offering advice and job opportunities. Again thank God for second chances.”

In this week’s Judge’s Report Judge Shane Gabbard wrote: “Willpower produces and brings more out of us than anything else I know. To that effect let me give you an example. Mr. Andy Stewart I have known for sometime. Andy expressed great willpower and reformation and decided to turn his life around. It’s amazing what a made up mind can get you. Congratulations on turning your life around Andy and also on your recent pardon. You have already proved what happens when someone decides to change.”

Andy’s employer, Corwin Cain (East KY Drywall, Inc.) wrote: “I have known Andy for several years before working for this company and he has worked for this company for several years and is a dependable, hard working and honest man... He has shown he is an upstanding citizen and all around quality person the years he has worked at East Ky Drywall, Inc.”

Andy has found a solid foundation upon which to rest his struggles through his deep faith in God. Andy shared his story with us writing: “God still does miracles. I’m living proof. I say, “T.G.I.F.” (Thank God I’m Forgiven). I have come a long way. I praise God where he has brought me from. He cured me from all my addictions. I am restored by the Lord. In July will make 11 years clean and sober. I am ashamed of the past but not the present. I thank the Lord for what the Governor did for me, which didn’t happen overnight. It took almost 11 years. I wrote the Governor 3 or 4 times telling him and sending him proof how I had changed. I sent him signatures of our officials, leaders, pastors, and my employer to tell him how much I have changed and was doing great. I have went to church the whole time. I ran A.A. meetings and N.A. meetings. I went to jails to speak. I work every day running work metal framing, hanging drywall and grid ceilings. I have given lots of people second chances that have been down and out and on drugs. I would hire them to work and try to talk to them and help them. I’m so glad my Mother got to see me change before she passed away. I want to thank God and every one who had faith in me and helped me in this process.”