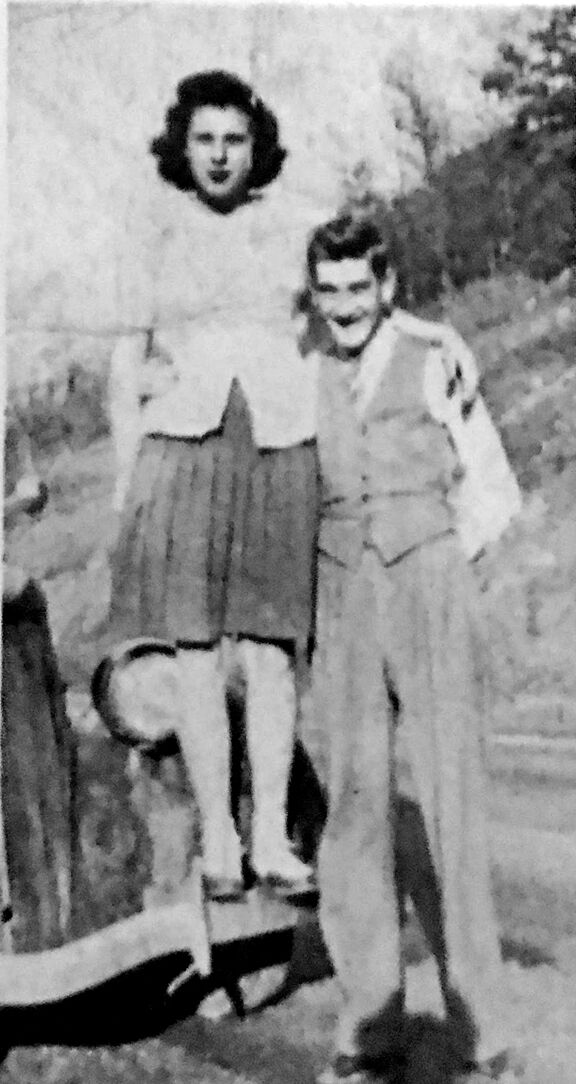 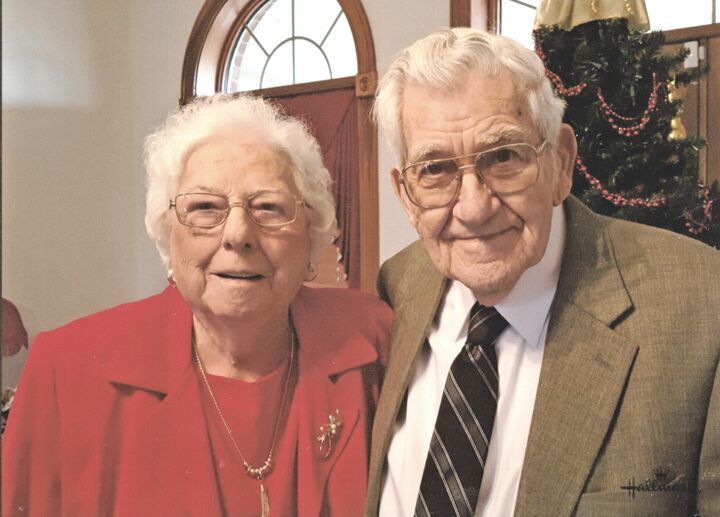 The Coles - As Time Goes By 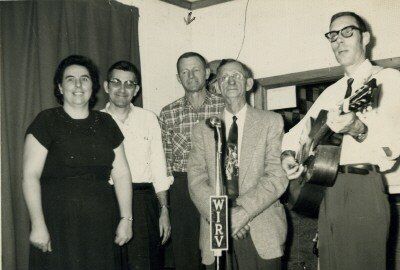 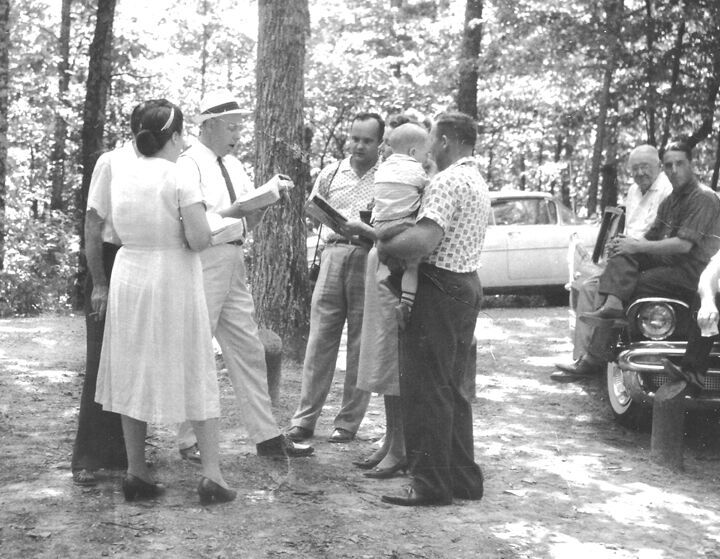 Wiley Cole and Ina Pearl Lakes were born in Jackson County just a little over a year and just a little under a mile apart. He was born on July 8th, 1927 and she on October 6th, 1928. They grew up just across Indian Creek from one another. The two married on June 27, 1946.  After seventy-four years of a well-lived life together, the two departed this world less than a day apart.  They will be missed, mourned and remembered as true friends to all who knew them, as giving and generous people, and as people who put “love thy neighbor” into practice at every opportunity.  The Cole’s also ran a very successful business, Cole Oil, in Jackson County.  If this was an ordinary story, it would start with the successful business but there was something extraordinary about Wiley and Ina Pearl that makes the success of their business somehow secondary to the larger story of their life together.

The story of Wiley and Ina Pearl Cole and their respective ancestors is woven into the tapestry of Jackson County History going back almost 100 years.  Growing up just across the creek from one another, there was never a time in their lives when they did not know one another.

But, as was so often the case in the 30’s and 40’s in Jackson County, there came a time when Ina’s parents, Grant and Dora (Gabbard) Lakes moved North to Ohio, in search of more financial security for their family.  At that time Bond Foley Lumber, the largest employer in the county, had closed for good and coal mining hadn’t really taken hold.  It was not unusual for Jackson County families to move to areas with more industry. It wasn’t too many years later, however, that the family moved back to Jackson County. In the intervening years, while the Lakes family was in Ohio, Ina Pearl had grown into a beautiful young woman and it wasn’t long after the family’s return that Wiley took notice and set about courting her.

Wiley had opened a small gas and service station on Indian Creek, next to his father, Charlie’s general store. It would be his first business venture.  This was at a time when there was a general store around just about every curve in the county as it was a way to make a few dollars to supplement what the garden put on the table and to buy the occasional new pair of shoes or perhaps an automobile, if one were fortunate.

The couple married in June of 1946. It was a simple affair at Ina’s mother’s home. Family and friends helped build them two rooms in which they would begin their married life.  The rooms were built either onto the gas station or the general store but that detail is lost to history. The business then had one gas pump and one lime truck to its name.  These were simple beginnings for a couple whose names would come to be household words in the county. But WWII had ended and the Indian Creek Rock Quarry was really starting to boom.  The post war economy was thriving. Trucks and employees of the quarry were running up and down Indian Creek all day, every day and they all needed fuel and often needed service.  Before long the Cole’s began to prosper.

As time goes by, tragedy struck with the death of Ina’s mother, Dora. She died young, leaving behind four other children.  Wiley and Ina stepped in to provide a home base for all of Ina’s siblings.  They continued to provide this home base even after her siblings had moved away to begin their own lives. They always had a home to which they could return. The couple had three children themselves, Ray, Betty Lou and Patricia, so their lives were full of children who needed them.

In the 50’s and 60s the business really began to prosper.  Wiley became associated with Shell Oil and decided to build the Shell Station in McKee, where it still stands today. Later Wiley  became associated with Curry Oil, which he eventually bought out. As time goes by there will be a series of stations under the banner of Cole Oil as the company spread out to locations throughout Central and Eastern Kentucky.

Both Wiley and Ina Pearl were deeply rooted in their Christian upbringing and took the gospel to heart.  Some people bring the community to Church.  Wiley and Ina Pearl Cole brought the Church to the community. They helped where they found a need, anonymously giving to individuals, groups and churches where they felt they could best serve the community. It was not rare for them to send out a shipment of home heating oil in the winter, knowing they might never be paid, because the thought of children being cold was not something they could tolerate.  They knew how to serve others.  This, in and of itself, is a rare trait and one that garnered them the love and respect of their community at large in a far more fundamental way than holding the title on a successful business.   The business itself was a family affair, but it was not the business they most wanted to pass on to their children. When their children or others would ask their advice when deciding what to do with their future they would receive the following advice,  “I want you to do something that will do other people good.” This was the legacy they wanted to pass on to the next generations, the Christian call of service to others.

They were members of both the Indian Creek Baptist Church and the McKee Baptist Church.  Both of them loved music and loved to sing.  They established the Indian Creek Baptist Quartet, which consisted of Wiley as tenor, Ina Pearl as alto, Luther Parrett, lead and Grover Brewer, bass.  Together, over the years, they sang at practically every funeral and revival in Jackson County.  After the family moved to Richmond, Wiley would return to Jackson County every Sunday to teach Sunday School for as long as he was able.

It has been said that, on Sunday, you never saw Wiley without a Bible in his hand.  The inscription in one such bible, given in his honor reads, “Given in honor of Wiley Cole, Jackson County resident and business man and brother to all the folks he met. “  It might also be said that Wiley and Ina Cole were never seen when they were not carrying the Bible in their hearts so strong was their conviction that one’s life should be lived in the service of others.

Though the family moved to Richmond years ago, their story and their hearts never left Jackson County. They returned again and again for as long as they were able to drive. Their legacy rests here among these hills and in the hearts and minds of all who knew them.

On Friday, July 31st, 2020, the couple was laid to rest together, as they lived their life together for 74 years.  It is only fitting that their passing gives up pause to consider what it means to be successful.  There is a lesson in their story for all to take to heart. We are more, in this life, than the assets we accumulate, the businesses we run, the name we may make for ourselves with success in worldly matters.  Wiley and Ina Pearl Cole knew that.  They knew that a man’s measure, or a woman’s, is taken by the degree to which they serve others.  In their final evaluation, Wiley and Ina’s measure is as deep as a mountain holler and as wide as the reach of spring for they remembered, as we all should remember, that we belong to one another.

May they rest together in eternal peace, well earned and well deserved.

“And when two lovers woo,

they still say “I love you.”

On that you can rely.

No matter what the future brings,

As time goes by.”