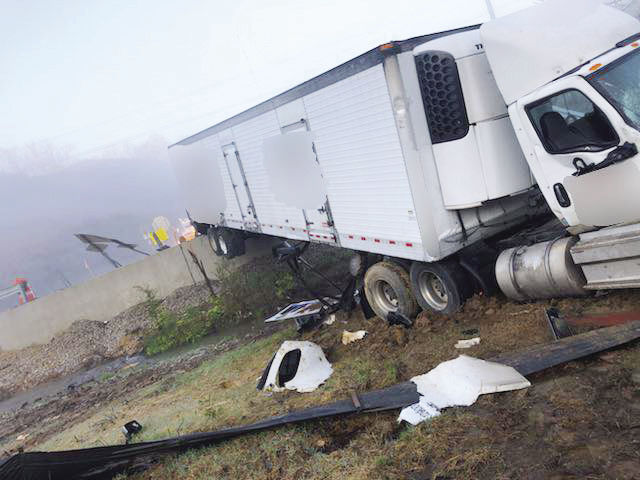 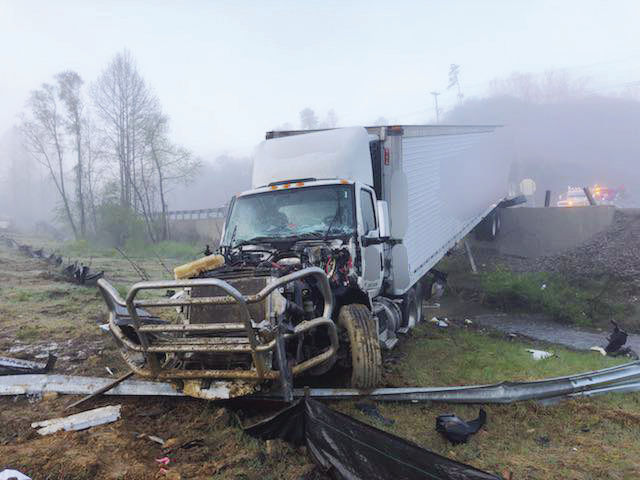 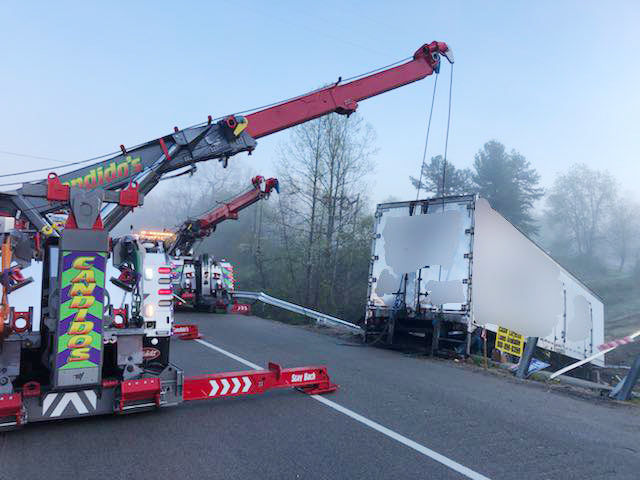 On Monday, April 27, 2020 Sheriff Paul Hays responded to the scene of a one-vehicle accident at the intersection of KY Hwy 30 and US Hwy 421 at Tyner, KY. According to Sheriff Hays’ accident report, Coty Hall, 28, of Corbin, KY was traveling east on KY Hwy 30 driving a 2020 International 2000 series Tractor/Semi-Trailer truck. Sheriff Hays describes the environmental conditions with the roadway not being lighted and it was dark with significant fog and misting rainfall. The report states that as Hall came down an incline to the intersection of Hwy 30 & US Hwy 421, the driver failed to see the Stop sign until it was too late. The driver stated that he had no run that route from that direction before and the fig was very intense, limiting his visibility. When the driver realized he had come to an intersection he applied his brakes but was unable to stop. The vehicle crossed US 421 and struck a guardrail. The tractor trailer continued through the guardrail and over an embankment where it came to rest across a small stream with the rear of the trailer lodged on a concrete headwall. Sheriff Hays estimated that approximately 100 feet of guardrail was destroyed by the collision.

Sheriff Hays stated that a small fuel tank reportedly ruptured, spilling approximately 20 gallons of diesel fuel. However, Hays also reported that he observed no leaks upon arrival. The company, Reinhart Transportation, LLC independently contacted an ECO service to clean up any spillage caused by the accident. Candidos Towing service required three tow trucks and a repair truck to remove the vehicle from the scene. Jackson County State Highway Garage personnel arrived at the scene to clean up any debris on the roadway and put up temporary barriers where the guardrail was destroyed. Pond Creek Fire Department provided point control assistance to Sheriff Hays for approximately four hours. There were no reported injuries.

More cases of COVID in Clay