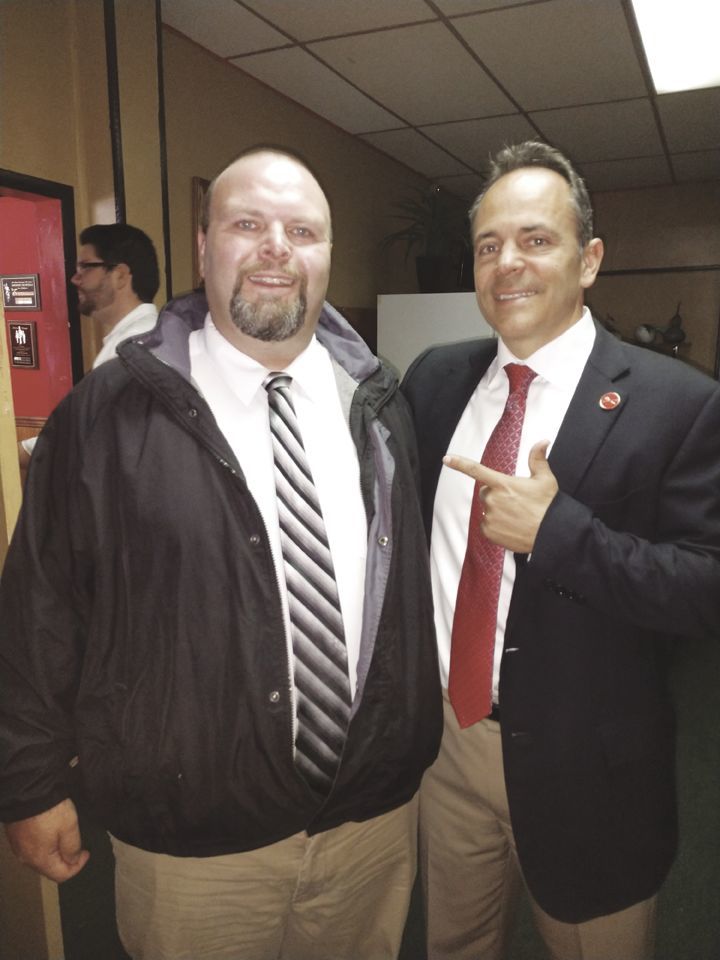 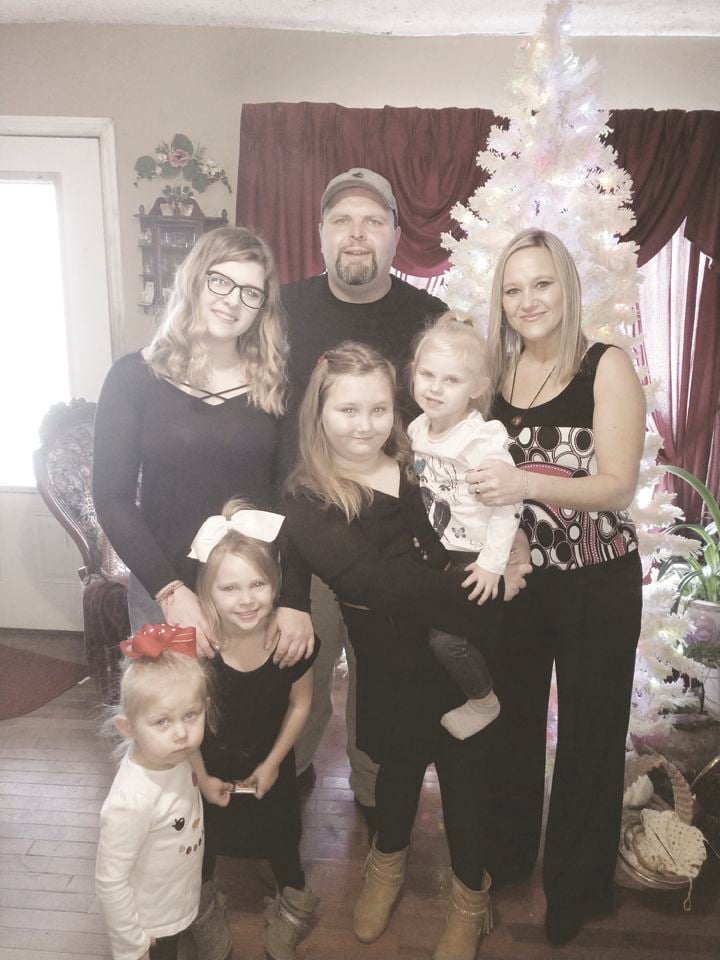 Brandon Harrison (middle back) with his family: Jasmine and Trish, Lexi, Kiley (holding Dakota), and Desiray (in front)

It is a new year…a new beginning. This time of year is characterized by New Year’s Resolutions. After all who among us hasn’t found themselves needing a fresh start. There are three members of our community that made their way through a dark period and have dedicated themselves to a fresh start. Their new start required lots of dedication, commitment and hard work. They have every reason to be proud of their accomplishments and every reason to be optimistic about the new year and the future. The community should also be proud of their accomplishments as well.

As part of his some of his last official acts, Governor Matt Bevin issued 428 pardons and commutations. Several of these pardons were controversial making the news and attracting scrutiny. However, most of the pardons issued by the former Governor were not controversial at all. A great deal of the pardons issued were earned by the recipients through years of hard work and dedication toward turning their lives around. Unfortunately, the news cycle tends to focus on the sensational and the negative. In fairness, time should be spent addressing those people that honestly turned their lives around and earned themselves a second chance. Among those that did just that, (earning full, unconditional pardons from the former Governor) were three Jackson County residents: Edison Lee Witt, 42, of McKee, Ky, Edward Andrew “Andy” Stewart, 53, of McKee, KY and James “Brandon” Harrison, 48 of McKee, KY. All three of these individuals made mistakes and were convicted of crimes. However, they were each strong enough to not let that be the end. Through strength and determination they each found their way back to functional, healthy lives. They have every reason to be proud of their accomplishments. Over the next few weeks each of these individuals will be celebrated for turning their lives around. Maybe their experiences will help the next person that finds themselves in a dark place find the strength to do the same.

This week we will focus on James “Brandon” Harrison.

On December 06, 2019 former Governor Matt Bevin issued Executive Order 2019-1249 that granted James “Brandon” Harrison a full and unconditional pardon. In the text of the pardon Governor Bevin wrote: “James “Brandon” Harrison has done an outstanding job of turning his life around. His journey to recovery serves as a shining example for others to follow…”

Brandon faced his long journey to recovery with others walking a similar path. They took strength from one another and realized that one important way to navigate the difficulties is with one another’s support and love. One of Brandon’s close fronds, Sam Sparks, reached out and offered this comment, “I love him like a Brother. I remember our long talks as we lay on our racks hundreds of miles away from our families. Trying to find reasoning, a hope in the midst of all the destruction we caused during our years of Addiction. To say I know personally our past is the key to unlocking the doors for other who don’t know the way out from Active Addiction. We are, by far, not proud of our past. We hurt a lot of innocent people. However we are grateful for it. If our past has helped Just one person.....It was worth it.”

Brandon’s efforts have not gone unnoticed or unappreciated by our local community leaders either. Sheriff Paul Hays commented on Harrison’s pardon saying, “I’m very pleased to know Brandon is on the right track. He is completely off any illegal substance, works every day and is a positive contributor to our county. It should please us all to know that people can change.”

Jailer Brian Gabbard remarked, “Brandon Harrison has turned his life around. Not only is he no longer addicted to illegal drugs, he has become a productive citizen and earned the respect of his family and friends. Thank God for second chances and thank God for the ones that use those chances to their benefit.”

In this week’s Judge’s Report Judge Shane Gabbard wrote: “To end this set of notes I would like to remind us that life is full of decisions. We make them every day and sometimes we pay a heavy price for the wrong decision. A wrong decision is a mistake and I have never met anyone that’s not made their share of them. We are one decision away from being in the same place as a lot of people that are incarcerated. Sometimes mistakes are met with excuses and excuses never reform anyone or correct any problem. It’s easier to make an excuse than to make amends. However when someone takes responsibility and makes amends we need to encourage that. One young man from our community did just that by completing recovery and turning his life around. Mr. Brandon Harrison, we encourage you to share your story with others who have made mistakes in life and show them that second chances are real Congratulations on being pardoned and having a chance to live a productive life.”

Brandon shared his story with us. He wrote:

“My name is Brandon Harrison and my first incarceration was in 2005 for the next five years I was in and out of jail all due to the fact that I struggled with drug addiction. Finally in 2010 I had to just give up and give in. I made a personal decision to stop no matter what it took. The first step was to clean out and that took a 5 month stretch of jail time. Then a 5 month trip to rehab were I met some wonderful like-minded people at West Care. After West Care I had three years of Jackson Co. Drug Court and through support and responsibility I learned to live life without drugs. Which worked but was a day to day struggle my real transformation came when I rededicated my life to Christ in 2016. This took all the struggle away and made me the man that I am today.

I would also like to add that once you receive a felony you cannot find work anywhere. And that this needs to be changed. If we expect to have people rehabilitated and to move back into society we cannot hold them to an impossible standard. You cannot get a job anywhere once you check that you are a felon on their application. I have dual degrees in CAD one in Architectural and one in Mechanical. I was unable to find any work in my field and mostly had to do odd jobs and construction work. It was a life sentence instead of rehabilitation.”

Brandon expressed that he wants to continue to offer his help to others that are in desperate need of guidance and support. Brandon said, “I hope to form an advocacy group to help get these Jim Crow style laws changed. A felony drug charge should not destroy someone completely, especially if they are trying to redeem themselves. Trust me I could write a book on the struggles a felon has to go through just to provide for their families.”

Brandon continued, “First I would like to thank GOD for the amazing transformation he has made in my life. I would also like to thank the Jackson Co. Drug Court for the help on starting my amazing journey. It has taken ten years to get to this point where I can finally get this part of my life behind me. It has taken a lot of struggles and dedication to finally get here. Through my drug addiction, the ones who really suffered were my family and I can never let them know how sorry I am for that time of my life. I want to thank former Governor Bevin and his whole administration for granting me my pardon. I wish for them nothing but the best God has to offer. I had to wait 5 years after my offence to have my rights restored and 7 years after my offence to get an expungement, which left me still with a charge that could not be removed which was detrimental to my career. After having 20+ letters of recommendation from prominent members of our community and multiple letters to the former Governor since 2017 it was a Christmas Miracle for me to receive my Pardon. I am now a faithful member of Sand Gap United Baptist Church where you can find me as music director every Sunday morning. I am a wonderful son, brother, uncle, father, grandson, friend, and fiancée to a wonderful woman. I am a hard working productive member of society where I have a career at Phoenix Products Inc. (who I also want to thank for believing in me). I am the Lead Engineer\ CAD Tech. I analyze Government Technical Data packages where I routinely find mistakes. I also design long life reusable containers for high end, high cost assets for the DoD and other Aerospace Industries. To say my life has been a miraculous journey is an understatement and I owe it all to God and a wonderful supporting family. I wish everyone a blessed new year in 2020.”