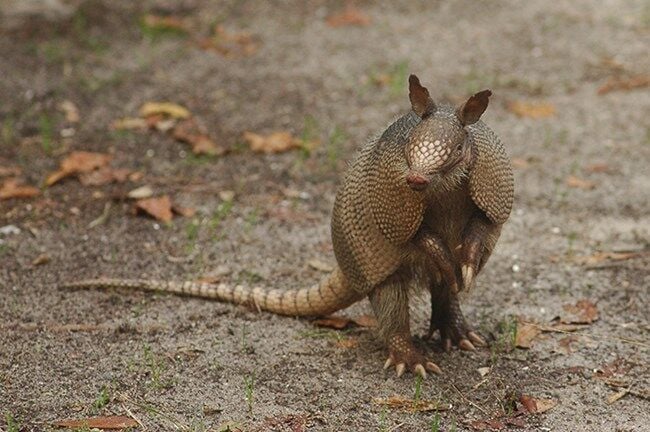 This map shows the ongoing documentation efforts (up thru 2019) to record the locations of Armadillos as they migrate into Kentucky. Source: John MacGregor KY F&W Resources

This map shows the ongoing documentation efforts (up thru 2019) to record the locations of Armadillos as they migrate into Kentucky. Source: John MacGregor KY F&W Resources

Recent Facebook posts and pictures from local residents are evidence of the rising frequency of Armadillo sightings in the state. Individuals have documented road kills and sightings of live armadillos in Jackson County near McKee, Ky and on Big Hill in Madison County (near the Jackson County line). Kentucky Department of Fish and Wildlife Resources Herpetologist & Nongame Wildlife Specialist John MacGregor says that Kentucky sightings of the nine-banded armadillo go as far back as the mid-1980’s, but that the animal only started showing up regularly in the early 2000’s. As winters grow milder, MacGregor says the animals are gradually moving northward and eastward. There have been documented sightings as far east as Pike County. However, the recent sightings were the first for both Jackson County and Madison County.

Armadillos first began their northern expansion into the United States from Mexico about 150 years ago. 100 years later there were still no records from Kentucky, although they were then found as far north as west Tennessee. How far north they will spread is unknown. Cold climates may be a limiting factor to their spread. Today the animal has been spotted all across the state of Kentucky. There is a breeding population established in western Kentucky at Land Between the Lakes.

MacGregor says armadillos don’t seem to do much harm, but that they may dig up lawns looking for grubs and insects. He also advises anyone who runs across an armadillo to enjoy the moment, but steer clear from touching it – the animals are considered a natural host for the bacterium that cause leprosy. “The risk is very, very low of contracting leprosy from these animals but it does represent a risk,” MacGregor reported.

Armadillos may reach a size of about 30 inches from snout to tail tip and weigh up to 17 pounds. The males and females look alike but males tend to be somewhat larger than females. The armadillo is found in wide-ranging habitats including everything from tropical rain forests to arid semi-desert, grasslands, and temperate forests. They do, however, prefer moist or sandy soils since these facilitate easier digging of denning burrows as well as rooting for soil invertebrates like grubs. In addition to the “shell” they wear across their backs like a saddle Armadillos have very pronounced claws they use primarily for digging.

The females always give birth to four identical twins, all being derived from a single fertilized egg that divides in two, then divides again to form four zygotes before developing into individual embryos. The young are well developed at birth. This reduces mortality among the immature offspring. One litter per year is typical.

Interestingly, while Armadillos are capable of swimming they are also known to hold their breath and use their pronounced claws to “bottom walk” short distances across small streams! Another quirky behavior they exhibit is the tendency to jump straight up into the air when startled. “They have very poor hearing and poor eyesight,” MacGregor said. “When startled they will jump straight up into the air and this probably results in more roadkill incidents than would be the case otherwise. A lot of vehicles would simply pass over top the animal if it didn’t have the habit of jumping up in the air when startled.”