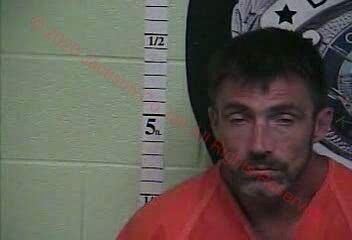 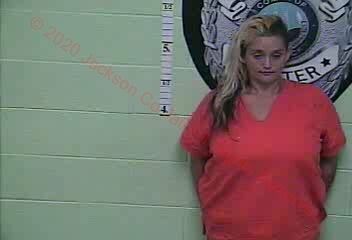 According to information supplied by the Jackson County Circuit Court Clerk’s Office, Deputy Daniel Issacs was recently notified of an attempted break-in at the residence of Eugene Truett. Upon arrival at the Truett’s driveway, Deputy Isaacs observed a motorcycle (silver 2003 Kawasaki VN1500) coming from the direction of the residence. After conducting a traffic stop on the motorcycle Deputy Isaacs was able to determine from Dispatch that the vehicle’s registration was cancelled by the KY DOT and that the license of the driver, Larry Clayton Montgomery, 45, of McKee, KY had been suspended. After getting verbal consent from Montgomery to search the motorcycle for anything illegal Deputy Isaacs began his search. As Isaacs continued his search toward a saddle bag on the right side Montgomery stated that there was a handgun in the saddle bag and that he was a convicted felon. At this time, Deputy Isaacs placed Montgomery in hand cuffs informing him that he was not under arrest at that time he was just being detained. Deputy Isaacs continued his search and located a Hawes Firearm Co. .22 caliber Western Six shooter hand gun in the saddle bag.

There was also a female passenger on the motorcycle, Shanelle White, 32, of McKee, KY and while speaking with her Deputy Isaacs noticed a bulge in the back of her shorts at the waist line. When questioned regarding the bulge she stated it was a pipe and retrieved it for the deputy. She handed Isaacs a white sock that contained a clear glass pipe that had a heavy white residue inside. At this time the owner of the residence, Eugene Truett arrived on the scene. Truett positively identified the handgun as being his property. When Deputy Isaacs asked Montgomery where he had obtained the handgun he stated he had taken it from Truett’s vehicle. At this point Montgomery and White were both placed under arrest. The firearm was returned to Truett at the scene.

Montgomery appeared in District Court before Judge Henria Bailey-Lewis for arraignment on charges of operating on a suspended/revoked operators license, theft by unlawful taking – firearm, convicted felon in possession of a firearm, and failure of owner to maintain required insurance/security 1st. Montgomery entered a plea of “not guilty” and a preliminary hearing was scheduled for September 09, 2020. Montgomery remains in custody at the Jackson County Detention Center under a $10,000 cash bond while awaiting his next court appearance.

White also appeared before Judge Henria Bailey-Lewis for arraignment on charges of drug paraphernalia – buy/possess. White pled “guilty” to that charge and the court accepted the guilty plea as being knowledgeable, informed, and voluntary. White was sentenced to two (2) days in jail with time served (2 days) being counted. She was also fined $100 plus court costs.