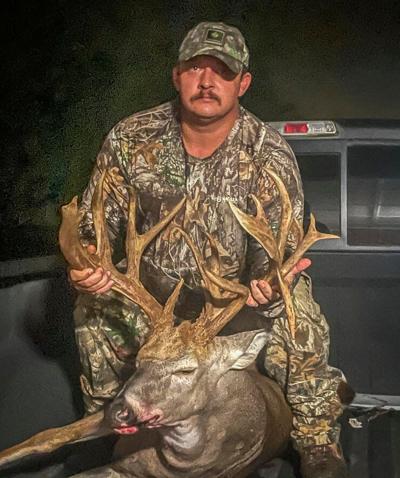 The days of driving down the road, seeing a deer in a field, and knocking on the landowner's door for permission to hunt are over, right? Not always. Kentucky hunter Ricky Daugherty tried it this season, and it paid off with a giant non-typical whitetail.

Ricky's buck had 18 scorable points and came in at just over 213" green gross B&C. Image by Ricky Daugherty

Daugherty, of Hopkins County, was on his way home from work when he noticed a couple nice 8-point bucks standing in a field. He stopped and knocked on the door to see if he could hunt there during the upcoming season. The landowner said yes, and so Daugherty set about scouting the farm.

As August rolled around, he had cameras out over a few bait piles, which are legal in Kentucky. He had gotten several photos, but no bucks really grabbed his attention. Even as the early September bow season kicked off, Daugherty still hadn’t seen anything to make him change a trip he'd planned to the lake. But once he got home from that, he decided to move his cameras around and put up a blind near a CRP field that offered good cover.

On the evening of September 15, Daugherty was home grilling some steaks when his phone alert went off. He checked his app and was shocked to see a monster buck in front of his camera. “I couldn’t believe the size of the buck on my camera. I probably showed it to way more people over the next few days than I should have,” he said.

The big buck followed a regular pattern throughout the late summer and early fall, showing up every 6 to 7 days. Image by Ricky Daugherty

Even though his hunting buddies all urged him to get in on the big deer as quickly as possible, Daugherty knew he had to be patient to keep from spooking the buck and running him off. “With my blind set up, I knew I had to hunt only the evenings because the buck was often there in the mornings before daylight. I also knew I could only hunt a south wind. Anything else and the buck would spook well before he ever got into range,” he said.

The buck wasn’t coming in every night. Daugherty said the deer was on a six to seven-day pattern, where he would show up just before dark. As much as he wanted to take a chance, the hunter knew he needed to wait for the right wind pattern.

“October 6 was day six of his schedule and the wind was right. I knew the buck was going to show up, but I had to work,” said Daugherty. “I watched my phone all evening. Every time the camera alert would go off, I knew it was going to be him.”

But the buck never showed.

Daugherty was off work the following evening, and the wind was still right for his blind. He got home from his overnight shift that morning, showered, took a nap, and set an alarm to wake early in the afternoon. Ricky got to his blind a little before 4 o’clock. The warm temperature held deer movement to a minimum. Around 6 p.m., a doe and fawn entered the clearing in front of his blind. Ricky watched them for a few minutes then looked up the edge of the CRP field to see a large bodied deer around 200 yards away. “I knew it had to be him,” said Ricky.

A quick look through binoculars confirmed that it was the big buck he’d had on camera. It was the first time Daugherty had actually laid eyes on the deer. “I knew if I ever saw him in person that I would be to shook up to draw my bow, so I had already decided to hunt him with my TenPoint crossbow,” he said.

Daugherty readied his crossbow and watched the buck. “He fed around for a few minutes then started walking straight to me,” he said. “He just kept getting closer. Finally, at 18 yards, he stopped.” The buck was facing straight on at that point, giving Daugherty no shot.

While the old buck couldn’t catch his scent, the deer knew something wasn’t right. “He stood there with his nose up, then he started doing that classic head bob, trying to catch me moving. I knew he was getting nervous.”

The buck finally took a step to the left, exposing his shoulder. Daugherty centered his crosshairs and squeezed the trigger. The shot looked good and the buck bolted. At that point, adrenaline kicked in and Daugherty had to take a minute to compose himself before first calling his wife, then his brother to let them know what had happened.

Daugherty decided to give the deer plenty of time, so he eased out and went home. By the time his brother got there and they returned to the farm, nearly an hour had passed. The brothers went to the spot where the buck had been standing at the shot. “We found four small drops of blood, then a bit down the trail, a couple more. My heart sank. I knew with the heavy cover and not much of a blood trail, it would be hard to find him,” he said.

At that point, he decided to back off and call in a tracking dog. Daugherty reached out to Kenzie Taylor with Kentucky K9 Deer Tracking and her 1 1/2-year-old Bavarian mountain scent hound, Liebe.

Kenzie and Liebe got to the farm around 9 p.m. Liebe immediately picked up the trail and began tracking the buck. Soon, they started to find more blood. Then Liebe started acting funny. “I’d never been around a tracking dog searching for a deer,” Daugherty said. “I wasn’t sure what was happening.”

But then he heard Kenzie’s voice call out. “Ricky Daugherty, you just killed an absolute monster.” Daugherty said, “at that point, I just started yelling. I probably woke up the whole area.”

Ricky plans on having a full body mount done of the buck. Image by Ricky Daugherty

The buck looked even bigger on the ground than it had in the photos. The mainframe 10 sported 18 scorable points with an extra main beam and large drop tine on the left side. The rack green scored 213 ⅛” B&C, making it Daugherty's biggest buck by far. “I’d always told my wife that if I ever killed a deer that scored over 185, I was going to have a full body mount done. This one beat that by a long shot, and I’ve already had my taxidermist start making plans for the mount,” he said.

The Owsley County Cheerleading Team Gets Bid to State Competition