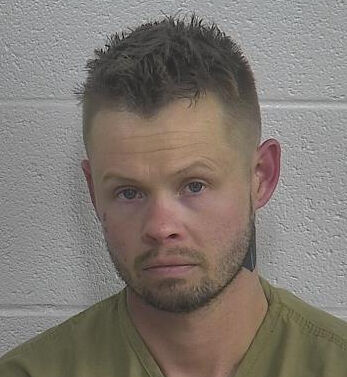 Laurel Sheriff's Deputy Bo Harris along with Deputy James Sizemore arrested Nicholas Hubbard age 31 of London on Friday night November 19, 2021 at approximately 11:42 PM. The arrest occurred with the assistance of the Pulaski County Sheriff's office after Laurel deputies earlier were dispatched to a disturbance complaint at a residence off Grace Loop approximately 6 miles South of London. Upon arrival at the scene deputies learned that a male suspect had fled the scene. Deputies conducted an investigation and learned that allegedly the male subject had struck a female subject there who was four months pregnant by allegedly throwing her to the ground. Deputies noted several marks and bruises on the female victim. The victim stated she was going to the hospital to be checked out. In addition deputies noted a TV was pulled away from the drywall, a Christmas tree was overturned, and an electric fan thrown down the hallway. Laurel deputies were able to determine that the suspect could be located in Pulaski County and with assistance from the Pulaski County Sheriff's office were able to take the suspect into custody. In addition, the  suspect was wanted on outstanding warrant. Nicholas Hubbard was charged with wanton endangerment – first-degree: assault – 4th   degree. In Addition this subject was charged on a Laurel District Court bench warrant of arrest charging failure to appear in court or. This individual was lodged Laurel County correctional center. Photo of accused attached is courtesy of Laurel County correctional center.