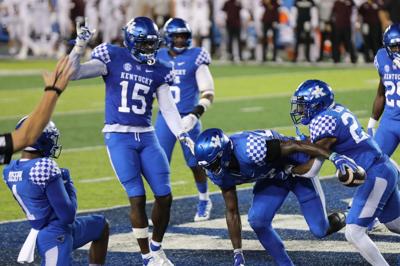 (LEXINGTON, Ky.) – Headlines can be misleading. In Kentucky’s 24 – 2 rout of Mississippi State last night at Kroger Field, Mike Leach’s supposedly high-powered offense wasn’t technically grounded. After all, the Bulldogs threw 70 passes—the most in SEC and program history. They also completed 45—another program record. Considering that State only totaled 275 net yards passing for the entire game, that comes out to a paltry 6 yards a catch.

You’re not racking up any frequent flyer miles at that rate. In fact, you’re looking strictly at puddle jumpers on a low budget commuter airline. Fly at your own risk.

The juggernaut we saw pile up 623 yards through the air just two short weeks ago at LSU suddenly looked rather pedestrian. Maybe pedestrian is too complimentary. All night long, the Kentucky defense played with the passion and discipline we had all anticipated from the get-go. Limiting the Bulldogs’ “yards after catch” was the mantra of the week, and the Wildcats certainly were effective in that realm. No missed tackles, no one got beat deep, and no one lost their poise.

However, the story of the night had to be the turnovers. Kentucky (1-2) came into this game having forced a grand total of zero miscues by the opposition. Six interceptions—the second most in school history (Cats had 7 in the game against Florida back in 1993)—helped balance the yearly stat sheets and preserve the near shut out. None of them were more crucial than Jamin Davis’ swipe in the end zone on the final play of the first half.

Josh Paschal’s 76-yard interception return in the 2nd quarter set the tone for the evening. It fell just two measly yards short of being a glorious pick 6. Nevertheless, it was Kentucky’s longest interception return at home against an SEC opponent in Kroger Field history.

The two points scored by State were the fewest for a Mike Leach coached team in his career. Like a good CEO, he talked about trimming the fat.

Wow! Sounds like a frustrated boss to me. I wouldn’t plan on booking any seats on “Air Leach” for the time being.

As for “Eddie Gran Airways”—well that’s another entity that needs a definite stimulus package. For the night, Kentucky was an anemic 8 for 21 passing for 73 yards. That’s as many pass completions as times that Max Duffy punted. The Kentucky defense caught more balls (6) than the wide receivers (5). The good news is that you only gain 157 yards on the evening but still win big. Last week you accumulated 559 yards and lose a heartbreaker. Go figure.

Dr. John Huang is a columnist for Nolan Group Media. His new book CUT TO THE CHASE is now available on Amazon. If you enjoy his writing, you can read more on www.huangswhinings.com or follow him on Twitter @KYHuangs.