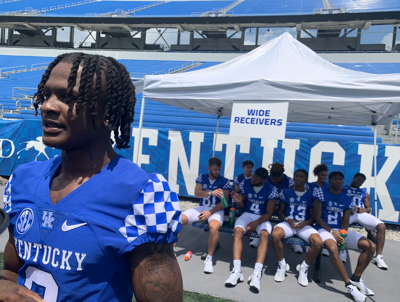 Dekel Crowdus and his merry band of wide receivers facing the media scrum at UK Football Media Day. How in the world will Kentucky utilize all this versatile talent? (Photo Credit Dr. John Huang)

(LEXINGTON, Ky.) – I’ve been watching Kentucky Football for over half a century now. During that time, I don’t think I’ve ever seen fans and media as excited about the start of a football season as they are about this 2022-23 campaign.

Based on the reactions and comments gleaned at Kentucky Football Media Day held earlier today at Kroger Field, I’d venture to say that Wildcat coaches and players are feeling that exact same kind of anticipation.

Much of that hopefulness stems from Kentucky’s hyped-up wide receiver corps. From everything I’ve seen and heard thus far, these guys are as good as advertised. Their head coach, Mark Stoops, certainly thinks so.

“I really feel good [about the wide receivers],” Stoops told the Media Day mob. “I really do. I feel with Dane [Key] and DeMarcus [Harris], and Tayvion [Robinson], they gave us the right amount of experience and playmaking ability.”

Key, the freshman phenom from Frederick Douglass High School in Lexington, arrived on campus early and participated fully in spring practice. With his size, speed, and smarts, many have already penciled the legacy recruit into the starting lineup. Together with the plethora of talent surrounding him, the 6’3” speedster intends to make an immediate impact on this Wildcat team.

“There is a lot of excitement that goes around the room,” Key admitted. “Us as a receiver group, we’re going to come out and prove and show what the hype is about.”

The receiver group Key mentioned exudes both quality and quantity. Wan’Dale Robinson has taken his talents to the NFL, but there’s still plenty of speed, strength, and a lot more size to make up for his absence.

In addition to the aforementioned Robinson, Harris, and Key, you can also factor Chris Lewis, Barion Brown, Chauncey Magwood, Dee Beckwith, and Tae Tae Crumes into the competitive mix. You think Dane Key is fast? Jordan Anthony or Brandon White will make your head spin.

If all those names still don’t raise your pulse, then let me add one more. Anyone remember Dekel Crowdus? The four-star prospect—also out of Frederick Douglass—is as excited as ever and finally at full strength after missing all last season due to a knee strain.

With all this bravado and testosterone at his disposal, first-year offensive coordinator Rich Scangarello must feel like a mad scientist in search of the ideal explosive elements.

“It’s going to vary week to week,” Scangarello answered, when asked how many receivers he anticipated using. “We have a lot of unique traited players…The amount and how you use guys will always differ based on what’s best that week and having the flexibility with the guys we have. Plus, they’re all pretty smart guys, which allows us to help with volume and do more things.”

Elite football players are competitive, and Mark Stoops and staff run a meritocracy-based system. How in the world, then, can all that talent happily co-exist?

“We won’t ever work against each other,” Key said. “Of course, it’s a competition in the room as to who’s going to play. We’re all out there to help, but we’re also all about letting the best player play. The best player is playing, and every guy on the team agrees with that. So, whenever we go out and help each other, it’s really just helping the team.”

These guys—at least on Media Day—seemed to really like each other. The guy getting them the ball, quarterback Will Levis, went out of his way to emphasize the camaraderie oozing between the members of his gifted receiving corps.

“The thing I’ve been most impressed with is the whole room’s ability to learn from each other, buy into the whole team’s philosophy, not really get too competitive, and just use it as motivation to get each of themselves better as players, which I really appreciated. We got guys across the board, and I really like our depth at the position.”

Even in the days of the Air Raid regime, Kentucky Football has never been known as Wide Receiver U. With a pro-style offense geared to get talented skill players to the next level, fans might want to start buckling up.

“I’m ready for that first game,” Key said. “I’m ready to come out of that tunnel with all that smoke. I’m ready to just hear all the great fans of BBN, and just to put on a show for all the fans that are going to be here.”

Dr. John Huang is a UK columnist for Nolan Group Media and editor-in-chief of JustTheCats.com. He also covers the NFL and MLB for Sports View America. You can follow him on Twitter @KYHuangs. If you enjoy his writing, be sure to check out his new book, KENTUCKY PASSION. https://www.amazon.com/Kentucky-Passion-Wildcat-Wisdom-Inspiration/dp/1684351669