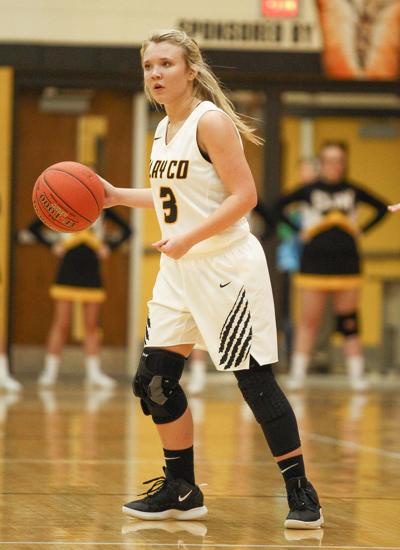 (MANCHESTER, Ky.) – As the boys defeated the Panthers on the road, the Lady Tigers (14-11) took care of business at home, winning 70-67 over the visiting Lady Panthers. “I was pleased with our effort,” said Coach James Burchell. “Knox is young, but very talented and shoot the ball well. I thought we did a great job of moving the ball and finding each other.”

Going blow for blow throughout, the Lady Tigers would lead 18-17 at the end of the first, as Taylor Asher (19pts) would explode for eight of her team leading 19. Allie Rose Phillips (3pts) would pour in a three, while Kaylee Mathis (18pts) and Alexis Lewis (16pts) would find the scoresheet as well.

The Lady Tigers would find their groove in the 2nd quarter, stepping up their defensive efforts to hold Knox to a mere nine points. Clay would outscore the Lady Panthers by 12, pouring in 21 points in the 2nd period. Mathis would add five points, while Lewis poured in eight of her 16. “We have shared the ball well in the past, but not often enough,” said Burchell. “I hope this becomes consistent.”

Burchell is right. The Lady Tigers are a much better team when the wealth is spread evenly amongst themselves. “When we have struggled this year, its due to not being patient and taking questionable shots. Our focus from here on out is to play the right way, and not get in such a hurry. Also, we have to be more aggressive in attacking the basket. We, as a team, need to get to the line more.”

The Lady Tigers would slow down on the defensive end, allowing Knox Central to make a comeback in the second half. Clay would ultimately hang on to win, as Asher and Courtney Jones made huge buckets in the 4th quarter to help secure the win. Four Lady Tigers reached double figures scoring, and a W was chalked in the scorebook.

Nearly one pound of meth confiscated

School pushed back to May 1st

Angel Road gets OK for repairs