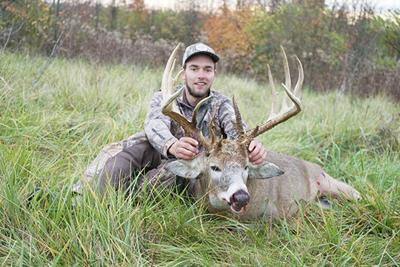 Many hunters can spend their entire life chasing the buck of their dreams, and never meet him. Jakob Begley is one of the few outdoorsmen who can say otherwise, as he downed what many have dubbed “the buck of a lifetime” on opening day this past Saturday. “I’m still trying to realize what I actually done this morning,” wrote Begley on his social media post with pictures of the deer.

The buck unofficially scored 212”, and surely is over 200”. When asked about where he killed the deer, Begley smirked and knew he couldn’t give away his secret spot. We can confirm it wasn’t in Clay County. “I’ve actually only hunted him the past two years,” said Begley. “Last year I got him on camera, and he was a big deer, but he absolutely blew up this year.”

Begley had to put in months of time and effort to down this amazing buck. “I made a few trips this summer scouting and checking cameras, but I never could find him hardly, so I quit messing with it until last week. I eventually decided to put out a camera, and he was the very first deer I had on there. I decided to bow hunt him Friday evening because he had shown up Thursday night before dark. I didn’t see anything that evening, so I went back Saturday morning and was blessed to get him about an hour after daylight.”

Corbin woman arrested twice in one week for theft, burglary