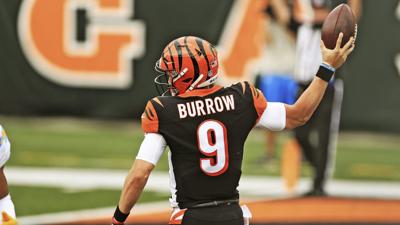 It was not a fairy tale by any stretch.

After wide receiver A.J. Green was called for pass interference with seven seconds left to nullify a perfect winning touchdown pass from rookie quarterback Joe Burrow, Randy Bullock missed the tying 31-yard field goal to the right as he appeared to pull a muscle in the Chargers' 16-13 victory Sunday in the opener at Paul Brown Stadium

Burrow got the ball on his own 3:18 with no timeouts left and he got them to the Chargers 48 at the two-minute warning and then he calmly sifted completions to Tyler Boyd, Michael Thomas and tight end C.J. Uzomah over the middle it was fairy tale time when running back Giovaniu Bernard caught a pass to put it at the 3.

After completing back-to-back passes of 15 and 19 yards to tight end C.J. Uzomah, Burrow had the Bengals in field-goal range but when he tried a shovel pass to running back Giovani Bernard and he threw it to Chargers defensive end Melvin Ingram instead with four minutes.

That was their second crushing turnover of the fourth quarter.

Bengals running back Joe Mixon, who came into the game with the second-longest streak in the NFL with most rushing attempts without a fumble. He suffered the first fumble since his rookie year in a 13-13 game with 12:14 left and old friend Nick Vigil recovered at the Bengals 25.

Mixon tried to avoid linebacker Denzel Perryman shooting up the middle and when he pirouetted the ball slipped out of his hands. The Chargers, rushing to a 160-yard day, converted it into a field goal by taking advantage of Bengals nose tackle  D.J. Reader's muscle cramps with a big running game. But a nice passed defensed by safety Jessie Bates in the zone on third down against tight end Hunter Henry saved the TD.

Burrow missed two touchdown pass on his first series of the second half, which came after Michael Badgley's missed 50-yard field goal kept the Bengals lead at 7-6.

On first-and-10 from the Chargers 35, wide receiver John Ross III smoked the secondary with his deep speed and it looked like Burrow's bomb was there in the end zone but went through Ross' hands.

Then on third-and-six from the Chargers 31, wide receiver A.J. Green stunned the secondary again, this time with a double move that had him wide open at the 10. But Burrow overthrew him before Randy Bullock hit a 50-yard field goal to give them a 10-6 lead with about nine minutes left in the third quarter.

They could thank Green for that. In his first game back nearly two years, Green was as advertised. It was just a nine-yard catch, but he outfought cornerback Casey Hayward Jr., and raced away from him to get the first down.

On the next series, Green had another catch (slot receiver Tyler Boyd's first catch of the day with six minutes left was huge to keep everything going with a third-and-ten grab over the middle), and Mixon began to look a little more comfortable with 63 yards on his first 17 carries.

The Bengals were looking at third-and-two from the Chargers 25 and went triple tight ends when they called a timeout after Mixon had picked up eight yards on the first downs. When they came back, they had one tight end with three wide receivers and Burrow took a deep shot for Green hand-fighting with Hayward at the right front pylon.

It looked like Green had a step on him, but Hayward was able to knock it away and Bullock had to kick a 43-yard field goal to give the Bengals a 13-6 lead with 1:36 left in the third quarter.

At that point the Bengals run defense began to wear down and it was exacerbated by nose tackle D.J. Reader leading with muscle cramps.  After Bullock mis-hit a kick off that turned into a 46-yard return, the Chargers ran it down their throats and it helped that wide receiver Keenan Allen caught a killing third down across the middle. Plus, end Sam Hubbard had a sack, but Taylor wriggled away for a completion. Josh Kelly's five-yard touchdown run, which put the Chargers over 120 yards rushing  tied it at 13 with 12:27 left.

Burrow didn't disappoint when he started the season scoring on a 23-yard touchdown run off a quarterback draw, but it was two defensive stands on fourth down that gave the Bengals a 7-6 half-time lead.

Yet as well as the new-look defense played, their end of half and game miseries continued. The Chargers had the ball on their own 14 with 33 seconds left and were able to get Michael Badgley's 43-yard field goal on the last play of the half knowing they would receive the second-half kickoff.

In an amazing moment about 25 minutes before kickoff, the Bengals and Chargers lined up on opposite goal lines for the playing of "Lift Every Voice," a moment made even more powerful by the hush of an empty stadium.

The Bengals were lined up across the goal line nearest their locker room that led into an end zone with the words. "End Racism." The Chargers stood in front of an end zone that said, "It Takes All Of Us."

Minutes later they linked arms with the Chargers at midfield for the national anthem.

The last-play field goal was fueled by this play:

Chargers quarterback Tryod Taylor sidestepped Carl Lawson's rush and when he got out of pocket he saw wide-open tight end Hunter Henry wide open for a 33-yard play that appeared to be the result of a lack of communication as rookie linebacker Akeem Davis-Gaither and strong safety Vonn Bell converged on the play.

Although the Chargers offensive line was the one injured and re-shuffled, Taylor (10 of 20 in the half for 120 yards), he had better time than Burrow. With Chargers sack ace Joey Bosa lining up more often in front of Bengals right tackle Bobby Hart instead of left tackle Jonah Williams, Burrow was chased all over the yard. He was nine of 14 for 51 yards in his first NFL half  and even though the Bengals were running quick throws, they couldn't be quick enough on third-and-long.

According to the Bengals radio team, the Bengals averaged just 1.4 yards on 10 first-down plays, eight of them passes. Running back Joe Mixon could only get enough traction for 30 yards on nine carries.

The legend began when Burrow cashed a second-and-10 quarterback draw for a 23-yard touchdown run up the middle that gave the Bengals a 7-0 lead with 2:24 left in the first quarter.

Burrow went five wides to spread the field and when he bolted up the middle, he patiently waited for center Trey Hopkins to bury safety Rayhawn Jenkins. With his hand calmly on Hopkins' back, he made a cut to the left at about the 15 and he was gone.

Naturally, it was made possible by wide receiver A.J. Green's third catch in his first game back in 21 months. It was a slant on third-and-two and went for 13 yards, but it Hart that made it possible. It was third-and-seven when he pointed a neutral zone violation. Green finished the half with three catches for 28 yards.

Green's first reception came off a zone read pass option as Burrow pulled it out of Mixon's belly and it accounted for Burrow's first first down, an 11-yarder on a vintage Green-esque ding slant.

Then they quickly went play-action to Mixon with Burrow dumping a seven-yard screen pass to tight end Drew Sample fueled by Hart's block on linebacker Drue Tranquill. It was a tough play for Tranquill, a starting linebacker lost for the day when he was carted off the field.

But after Mixon chewed up six yards on a run up the middle, the drive blew up on the ensuing play. The Bengals went five wide, but Jonah Williams allowed Joey Bosa to get pressure right away and Burrow tried to make something out of nothing. Tackle Jerry Tillery, coming from the other side, dumped him for a 14-yard loss.

But on the next series the Bengals forced a three-and-out after stuffing a first down run. On third-and-four Davis-Gaither screeched in untouched on a blitz and forced Taylor to overthrow wide receiver Keenan Allen covered tightly by cornerback Mackensie Alexander.

Burrow suffered another three-and-out when there was first down-pressure against an empty back-field set, the Chargers weren't fooled on a misdirection pitch to Mixon and on third-and-long Bosa again flushed out Burrow and that forced Burrow to throw a ball behind the line of scrimmage to Mixon that Mixon had to jump on to prevent the four-yard loss from being a turnover.

But the defense pitched another three-and-out with the aid of the Chargers' crowd-less false start on third down when the Bengals put ten men on the line. Cornerback Darius Phillips then prevented the first down when he came from behind went over wide receiver Mike Williams' shoulder to knock away a pass over the middle.

The Bengals then had great field position after defensive end Sam Hubbard made a great play on fourth-and-two and got the ball back at the Cincy 40 when he forced Taylor to cut on the option and he slipped and lost a yard.

But after Burrow converted a third-and-three on a quick flip to running back Giovani Bernard, the drive crumbled when they couldn't get in favorable down and distance. Hart false started and on third-and-11 Bosa roared up the field on Hart and sacked Burrow.

Punter Kevin Huber, having a great opening half in his 12th opening day for the Bengals, gave them a chance to down it inside the 5 but they couldn't get there.

Taylor then made his biggest throw of the day when he got into the red zone when he hit Mike Williams for a 36-yard-play down the right sideline with a throw over Phillips. When free safety Jessie Bates came over to deliver the hit, he was called for unnecessary roughness.

But the Bengals only allowed a field goal when the Chargers couldn't overcome an offensive pass interference call.

Another Burrow drive was broken up by more pressure when he was forced out of the pocket on third-and-six and his scramble was two yards shy.

The Bengals were lined up against a re-shuffled Chargers offensive line missing four-time Pro Bowl center Mike Pouncey and five-time Pro Bowl right guard Trai Turner. That meant left guard Dan Feeney had to move to center and backup guard Forrest Lamp had to replace him in in his third NFL stat. Ryan Groy, a seven-year veteran, drew his 18th career NFL start

to replace Thomas at right guard when he got called up from the practice start.

Plus, right tackle Bryan Bulaga, along with Turner one of their prized free-agent acquisitions after 111 starts in Green Bay,  has been struggling with a hamstring and was limited in Friday's practice.

The Bengals just couldn't take advantage of the fourth-down stops. On fourth-and-inches from the Bengals 40 late in the half, new tackles Mike Daniels and Christian Covington stoned Taylor on a sneak.