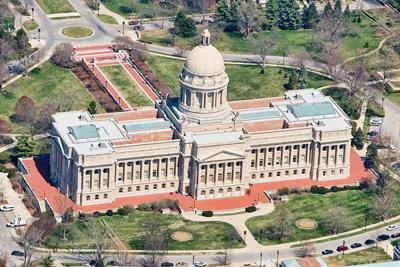 While a ban on texting and driving is not new, Kentuckians may soon be asked to put their phones down while driving altogether.

Rep. James Tipton, R-Taylorsville, testified before the Interim Joint Committee on Transportation on Monday about his intentions to file a bill for the 2022 legislative session that would only allow the hands-free use of a personal communication device while driving.

Under this proposed legislation, personal communication devices are defined as a text messaging device, a stand-alone computer, a tablet, a laptop, a notebook computer, a personal digital assistant, a GPS system, a telephone or any device capable of displaying a video, movie, or visual image.

The measure would make using your hands to operate a personal communication device while driving illegal. It would also prohibit drivers from unbuckling their seatbelt to reach for a device.

Drivers can, however, use a hands-free Bluetooth device to make phone calls while driving.

Lawmakers cannot make any decisions on any proposed legislation until the next legislative session begins on Jan. 4. Tipton said if the general assembly adopts this measure, there would be a grace period until Oct. 1, 2022, where drivers would receive a warning.

Kentucky would not be the first state to implement this type of law, Tipton said. According to Jennifer Smith, CEO and founder of StopDistractions.org, 24 states have adopted this type of legislation, including Tennessee, Virginia and Indiana.

This not the first time Tipton has sponsored a bill like this. He sponsored House Bill 255 during the 2020 legislative session, which did not make it to a floor vote in either chamber.

Kathleen Strack, a co-founder of Two Eyes, Just Try, testified alongside Tipton on Monday. Her brother died near Verona, Kentucky, in 2015 after his truck was hit by a distracted semi-truck driver. Strack said the driver of the semi had been sending and reading text messages for miles leading up to the accident.

Steve Blackistone, the state and local liaison for the National Transportation Safety Board (NTSB), also joined the conversation. He said NTSB supports this type of legislation.

“As a result of our investigations, we’ve seen firsthand that distraction is a growing and life-threatening problem,” Blackistone said. “To reduce the crashes and injuries and deaths, drivers completely need to refrain from engaging in these distractions.”

While discussing the proposed bill, a few lawmakers asked about the effectiveness of the state’s texting while driving ban. Tipton said that it is not uncommon for someone accused of texting while driving to say, “No, I wasn’t texting I was putting in a phone number,” or some other excuse. This legislation would attempt to close that loophole.