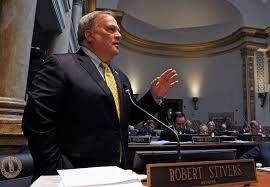 The General Assembly has passed three bills to limit the governor's power in emergencies, including the current pandemic. Gov. Andy Beshear is expected to veto them, and the legislature seems prepared to override him. But maybe not, Senate President Robert Stivers told Morgan Watkins of the Courier Journal.

"When the Courier Journal asked Stivers on Wednesday if the legislature would override any vetoes . . .  he said that could depend on the governor's reaction," Watkins reports.

"If Beshear vetoes the bills but is willing to talk about other ways to address the emergency powers issues through new legislation, Stivers indicated he and other top lawmakers would be open to that," Watkins reports.

"That's our job," Stivers said. "We’ve encouraged him to engage us. . . . How can I sit there and not be willing to discuss with him when that’s been our complaint for the last nine months?"

Stivers, House Speaker David Osborne and other legislators have criticized Beshear for not meeting with them to explain and discuss his emergency orders. Beshear, a Democrat, has accused the Republican leaders and Attorney General Daniel Cameron of political motives.

Enough of that, Stivers told Watkins: "He has to be open to candid dialogue, not personal dialogue, about how the institutions [can] work better."

Watkins writes, "Beshear probably will be hard to sell on making any significant changes to his authority while Covid-19 is still a major threat. The governor told the Courier Journal he thinks 'a discussion on emergency powers can be had' with lawmakers, but suggested taking immediate action on that isn't the best course of action.

"I’m always willing to sit down and have a conversation, but changing the rules in the midst of a worldwide health pandemic seems like a bad idea," Beshear told the Louisville newspaper.

Beshear has until Jan. 21 to sign or veto the legislation. Because the legislature is in recess and won't reconvene until Feb. 2, that gives the governor and legislators time to talk before override votes are set up.

Bills passed by the legislature normally take effect 90 days after passage, but all three bills have an emergency clause that would make them effective immediately.

If the legislature overrides Beshear's vetoes, the next stop is likely court, with a request by Beshear or other plaintiffs that the legislation be held in abeyance until its constitutionality is determined, Senate Democratic Leader Morgan McGarvey of Louisville told Watkins.

Thus, one or more judges could "ensure Beshear's emergency powers and Covid-19 orders stay intact — until a ruling on their legality is reached."

McGarvey, a lawyer, told Watkins that judges would be likely to issue injunctions, "which could last weeks or even months while any legal cases make their way through Kentucky's court system," she writes. "In the end, the courts could uphold or strike down the bills entirely. Another possibility: Parts of them could be deemed unconstitutional while others are allowed to stand."

"This could be a real legal mess," McGarvey told Watkins.

Even if no injunctions were issued, "That doesn't necessarily mean the Republican-run legislature would quickly flip a switch and wipe out all Beshear's pandemic rules," Watkins writes, quoting Osborne:

"I think it requires thoughtful consideration. One of the things that we've been somewhat critical of the governor of over time was not the particular policies but the fact that they were applied equally in every situation. So, I do think that it requires a much more strategic and thoughtful approach to doing it as opposed to just one size fits all."

Watkins reports, "Beshear contended the bills the legislature has passed would disrupt the state's response to the pandemic. And he made it clear he expects their collective result would be to get rid of restrictions his administration has used to fight the easily spread coronavirus."

Beshear told her, "The three proposals together would undo the rules and regulations that we have put in place that have saved lives, that have helped us to get through this pandemic better than most while at the same time keeping our economy open, even with some sacrifices that have to be made."

Watkins writes, "Beshear and Republican lawmakers' disagreement over his Covid-19 regulations largely reflect a persistent, nationwide argument: how best to balance the need to protect people from the virus with the need to dampen the pandemic's economic impacts on businesses and workers." She describes the bills:

Annville Resident Arrested at Scene of Shooting in Laurel County

Gov. Beshear: COVID Cases Decline and Many Businesses Can Now Increase Capacity to 60%

2nd State of Emergency in 3 Weeks for Jackson County