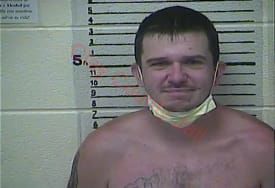 Clay County Sheriff Patrick Robinson is reporting that on July 4, 2020 at approximately 2:00 AM Clay County Sheriff K9 Deputy Wes Brumley along with Deputy Jared Smith arrested James Bowling, 34 of Highway 472. The arrest occurred when Deputy Brumley came into contact with the male subject at a business off of North Highway 421, upon initial contact the subject ran on foot toward the back of the store. The subject then turned on Deputy Brumley in an aggressive manner. Once failed lawful commands to regain the situation, Deputy Brumley attempted to deploy his Taser when the subject lunged toward Deputy Brumley. During the struggle with the subject merchandise inside the store was damaged along with Deputy Brumley sustaining injury. After the struggle the subject was placed under arrest without further incident. Confirmation with Clay County Dispatch showed the subject had an active Probation Violation for his arrest. Assisting on scene was Manchester City Police Officer Wes Wolfe.

James Bowling, 34 was charged with:

• Fleeing or Evading Police (on Foot)

'I'm Vicky, the one that set the house of fire'

Life in Quarantine with COVID-19