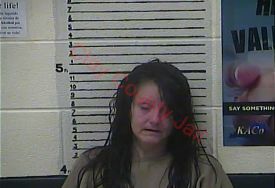 Clay County Sheriff Patrick Robinson is reporting that on May 16, 2020 at approximately 8:45 PM Clay County Sheriff Deputy Coty Arnold along with Deputy Jared Smith arrested Debra Bowling, 48 of North Highway 421. The arrest occurred when Deputies received a complaint of a verbal altercation between a store employee and a female individual who was refusing to leave the business on North Highway 421.

Upon contact with the above-mentioned subject, deputies conducted an investigation at which time discovered the female subject had been previously trespassed from the business. When deputies went to place the above-mentioned subject under arrest, she became combative. After a brief struggle the subject was placed under arrest. While being transported to the Clay County Detention Center the subject started kicking the windows of Deputy Arnold's patrol car.

Debra Bowling, 48 was charged with: