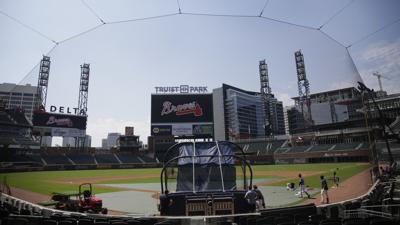 ATLANTA -- The Braves are going to gear up against a National League East rival, and their fans will get a much-desired early look at baseball again.

Before heading to New York for their July 24 Opening Day game against the Mets, the Braves will welcome the Marlins to Truist Park for exhibition games July 21-22. Both games will be broadcast by FOX Sports Southeast and streamed on the FOX Sports Go app.

The July 20 game will begin at 7:10 p.m. ET. The two teams will meet the following day at 4:10 p.m. These will be the only two exhibition games the Braves play ahead of their 60-game regular season. They played a pair of scrimmages this week, and they’ll continue with intrasquad games on a daily basis beginning Monday.

“I don’t have any doubt the pitchers will be stretched out to the point we anticipated them to be,” Braves manager Brian Snitker said. “After watching the intrasquads and knowing how much time we have left, I think position players will be in good shape, too. They’re getting a lot of at-bats in game situations and running the bases and all that. I feel good about where we’re at right now.”

Snitker said Mike Soroka and Josh Tomlin will serve as the starting pitchers when the Braves play their first intrasquad game on Monday.

Soroka will be tuning up for what would be his first Opening Day start. Tomlin will work four innings in preparation to begin the season either within the rotation or as one of the relievers assigned to piggyback a starter during the season’s first couple weeks.

Snitker has said Cole Hamels remains on schedule to be ready for the start of the season. But Snitker's recent revelation that Hamels has not yet been cleared to begin throwing live batting practice creates doubt about the veteran left-hander actually being on the Opening Day roster.

If the Braves were to use Hamels as their fifth starter, his first turn would come during the July 29 series finale against the Rays. There’s a chance he could be deemed ready if limited to 2-3 innings on that date. But if he is not throwing live BP early next week, the team likely won’t rush him just to make a start during the season’s first week.

Hamels missed all of Spring Training with left shoulder inflammation. The 36-year-old southpaw said he has gotten through his recent side sessions without any problems. But it’s starting to look like the Braves might need to fill his projected rotation spot with Tomlin or Kyle Wright (No. 4 prospect).

The Braves still are not sure when Freddie Freeman, Will Smith and Touki Toussaint might join the team for workouts at Truist Park. Each tested positive for COVID-19 last week.

Smith and Toussaint have both remained asymptomatic. Freeman has felt much better since dealing with a three-day fever late last week. But players will not be cleared to rejoin their teams until they test negative twice during a span of more than 24 hours.