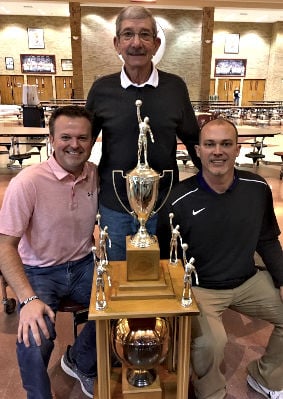 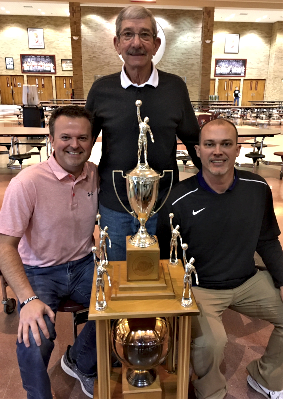 Twenty-five years after winning the Sweet Sixteen, the championship is still close to the hearts of (l-r) Bradley Payne, Dean Hobbs, and Patrick Critchelow. (Photo by Mike Fields)

HARNED – The specks of gray in Patrick Critchelow’s beard stubble are the first reminder on this visit to Breckinridge County that it has been 25 years – a quarter century! — since the undersized and underrated Fighting Tigers, led by their unflappable point guard, rolled into Rupp Arena, won the hearts of fans with a dazzling display of team basketball, and earned themselves the Sweet Sixteen title.

Critchelow, who was MVP of that state tournament, then tells you he’s been the head coach at Breckinridge County for 13 years now, and that he and his wife Kari have three kids. The oldest, daughter Lily, is a sophomore on the girls’ basketball team.

Bradley Payne, who was Critchelow’s shooting-guard sidekick, is also here to reminisce about those championship days. He still has boyish looks, but he’s been in coaching for more than two decades, and is currently head associate at Daviess County. He’s married to former Apollo and WKU hoops star Natalie Powers. They have four children and their oldest, son Jack, is a freshman player for Daviess County.

Thankfully, Dean Hobbs hasn’t changed much. Sure, the man who coached the Fighting Tigers to the state title and then retired after cutting down the nets, looks older. But at 72, he’s as feisty as ever. He can still take over a conversation with full-court-press vigor and recall every detail of that magical season.

There’s no question that Hobbs’ tough, exacting coaching style pushed Breckinridge County to the top. He had no choice. After all, he had promised himself that he would one day win a state title.

That promise came when he left his job at St. Romuald, a tiny private school in Hardinsburg, to take over at Breckinridge County for the 1978-79 season.

He told anybody who would listen that he was absolutely going to win a state tournament before he retired. “And they were all like, ‘Yeah, sure,” Hobbs recalled.

After a couple of rebuilding years, Hobbs had the Fighting Tigers in the Third Region finals. Alas, they lost to Owensboro.

It wouldn’t be the last time the Red Devils would spoil Hobbs’ dreams.

They also beat Breckinridge County in the region finals in 1984 and 1986, and escaped with an overtime semifinal win in 1992.

The Fighting Tigers looked like they would finally snag a region title in 1993 when they made it to the title game against Grayson County, a team they had whipped twice during the regular season.

But it wasn’t meant to be. Grayson County, playing on its home floor, won 57-54 to earn the trip to Rupp.

“I still remember leaving Leitchfield that night,” Critchelow said. “We had come so damn close.”

Payne has a stark memory, too: Hobbs sitting despondently in the locker room by himself after the game.

“He had gotten close over the years, with lots of regional runners-up and semifinals, but it was like he was snake-bit for a while,” Payne said. “I remember walking out of there thinking I only had two more years and wanting to get it done for him more than anything.”

Two years later, when Payne, Critchelow, Adam Mattingly and Jay Sills were senior starters, they got it done.

Nobody outside of Breckinridge County saw it coming. Neither the team nor any of its players cracked the preseason top 25 ratings.

With junior Jared Whitworth filling out the starting lineup, and senior Carl Dale Williams and junior Matt Mattingly first off the bench, the Fighting Tigers won 15 of their first 16 games.

But more than halfway through the season, they still weren’t getting much recognition in the state-wide polls.

In early February, that changed. Breckinridge County shot 75 percent in a 58-48 victory over No. 1 Muhlenberg North, ending the hosts’ 18-game winning streak.

After that signature win, Payne recalled Hobbs lobbying for his team in an interview with Owensboro sportswriter Jim Pickens.

“I remember he sat down with (Pickens) and said, ‘I ain’t saying a frickin’ word until you tell me you’re voting us No. 1. I’m tired of being disrespected.”

Breckinridge County finished the regular season 20-2, with its only losses (to Hancock County and Meade County) coming when it was missing a starter.

It wound up edging Muhlenberg South 40-38 in the region finals thanks to Critchelow’s leaning 12-footer in the lane with :03 left.

The Fighting Tigers were headed to the Sweet Sixteen for the first time since Butch Beard led them to the 1965 state championship.

Once Breckinridge County got to Rupp Arena, some media cast the team as a modern-day Hoosiers, a movie based on the true story of Milan, a small, rural school with an undersized team that won the Indiana state title in 1954.

Hobbs chafed at the comparison. He never thought of his guys as underdogs. “We’re a ‘90s team; we’re a darn good team,” he said at the time. “I don’t know what the deal is with all this Hoosiers stuff.”

One comparison did hold up: Breckinridge County, like Milan, took down the big boys in its path.

The Fighting Tigers beat Franklin County (62-56) and Scott County (79-59) to reach the semifinals against Marshall County, which was led by future Vanderbilt star and SEC Player of the Year Dan Langhi.

As it turned out, Breckinridge County devoured the Marshals for Saturday brunch, outscoring them 29-3 in the third quarter en route to a 68-39 blowout.

After the game, the Fighting Tigers didn’t show much emotion. When they got to the locker room they were exhausted and quiet. They just wanted to get back to their hotel — the El Dorado Inn — and put their feet up.

A few minutes later, assistant coach Ronnie Carman came in and told them that a local TV station needed video of them looking excited about their semifinal victory.

“He told us to get up, give high-fives to each other and act like we were celebrating so they would have something to put on the news,” Payne said. “So we did.

“But we knew we had one game left.”

In the finals, Pleasure Ridge Park, led by 6-foot-10 Michael Lockhart and 6-7 Shawn Hoover, had a huge size advantage on Breckinridge County, whose tallest starter was the 6-3 Mattingly.

Also, Panthers’ guard Charley Taylor was one of the quickest players in the state.

There was no question that the boys who came together from all over Breckinridge County — from Irvington, McQuady, Harned, Hardinsburg and Rough River — had proved they were the best in Kentucky.

In four games, they shot an astounding 61 percent (103 of 169) from the field. A lot of those were layups off turnovers generated by their suffocating, trapping defense.

“And here’s something else amazing to think about,” Hobbs said recently. “We were never behind at any quarter or half the whole state tournament. We played 16 quarters in front. It takes a little pressure off when you’re playing from in front.” 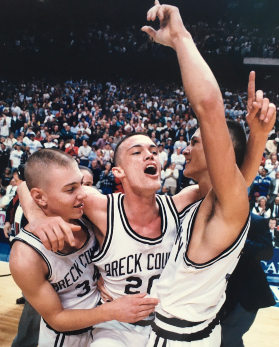 Critchelow was the leader of a determined, cohesive group.

“We had seven seniors, nobody was selfish, and we all got along,” he said. “If somebody wasn’t doing their job we got on them and held them accountable. That’s the definition of a team.”

Payne thought their team was so well-schooled, so well-conditioned and so well-prepared that their opponents were almost always outmatched.

“When you’re good and you know you’re good, that’s a dangerous combination,” he said. “A lot of people think they’re good but they’re really not worth a damn. It’s easy to beat them.”

Adam Mattingly, who now lives in Winchester, said there was a simple philosophy: “Get out there and do your job. You had an assignment and you did it. If you didn’t, you came out and coach (Ronnie) Carman or coach (David) Miller was willing to help you on the sidelines to let you know what you did wrong.”

Sills, who now lives in Bowling Green, said what they accomplished in Rupp Arena is “still surreal, still unbelievable.

“We came out not scared – I don’t know how because we were all petrified – and beat some really good teams. We just came together at the right time and peaked perfectly.”

The spoils of a state championship amounted to more than just a trophy, a piece of net and a late-night steak dinner at Frisch’s Big Boy.

When the team returned home that Sunday, there was a parade, followed by a community celebration at the high school gym. Critchelow was surprised to see Kentucky Wesleyan assistant coach Wayne Boultinghouse there.

There was good reason: Boultinghouse told Critichelow he had a full ride to KWC. Four years later, he helped the Panthers win a Division II national title.

“My family could never have afforded me going there,” Critchelow said. “So that scholarship was my gateway. I got an education that allowed me to become a teacher and coach. Winning the state tournament for sure got me there.”

Payne has the same kind of story. He is convinced that Lindsey Wilson offered him the chance to play college hoops “because of the hype surrounding us and all the attention we got” in the Sweet Sixteen.

Just a few years later, when he was 21 and still taking college courses, Payne was hired as the boys’ basketball coach at Whitesville Trinity.

“No way that occurs without the aura of, ‘Hey, this guy won a state championship,'” he said. “It opened doors for me. And 21 years later I’m still in coaching.”

Sills had an interesting take on the aftereffects of that state title.

“It’s not the best thing in the world for an 18-year old to come across that kind of success so early,” he said, “because you feel really entitled. So you get humbled at the next level.

“That was hard. But as you get older and look back on it, you see the whole deal, that if you work really, really hard at one goal, you’ll get there. That’s what I took from it.”

And in this basketball-crazy state, when you win a state championship with a team as beloved as Breckinridge County, you’re never forgotten.

“No matter where I’ve been in Kentucky, I’ve run across someone who’ll be like, ‘Oh, I remember your team,” Sills said. “So that’s been pretty cool. To be 43 now, and have people still remember you is fantastic.”

Mattingly looks back on the Fighting Tigers run with mixed emotions. “It was a great journey, a great memory with great people,” he said. “It couldn’t have been better.

Clay native admonished by President in 1911

Woman claims to be the 'mayor'