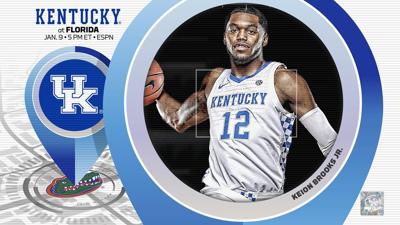 After a rough start to the season, Kentucky head coach John Calipari and his team decided to start with a "clean slate" as the calendar flipped to 2021 and Southeastern Conference play began.

So far, the plan seems to be paying dividends. The Cats are 2-0 to start conference play, with a pair of nail-biting wins under their belts. First, a double-overtime road win at Mississippi State, then a down-to-the-wire home win against Vanderbilt on Tuesday.

While those games were by no means signature Kentucky wins, they were victories and they have provided the team with confidence. Now comes an even bigger task as the Cats hit the road to face Florida at the O'Connell Center in Gainesville, which is always one of the toughest places to play in the SEC.

Kentucky has had a different look in its two SEC games so far. First, after struggling a bit as the 2020 calendar year ended, forward Olivier Sarr has played much better. In his first two SEC games, Sarr is averaging 19.0 points and 9.5 rebounds per game.

The most obvious difference in the Cats has come from redshirt freshman guard Dontaie Allen. After playing 20 minutes total in four games early in the season, Allen has become a key cog in the UK attack during SEC play. He scored a career-high 23 points in UK's win at Mississippi State and he followed that with a 14-point effort in Tuesday's win over Vanderbilt.

Against Mississippi State, Allen was a bit of an unknown. But against Vanderbilt on Tuesday, he noticed a difference in how he was guarded.

"I noticed later against Vandy it was more of a face guard, so I'm going to have to do things to get open as far as just maybe running hard and maybe taking different routes," Allen said. "I feel like the first team (Mississippi State) wasn't really as prepared, but the second team (Vanderbilt) was a little more."

Allen does realize that his presence on the floor can make a difference for his team.

"I think the big thing from my perspective is just going in the games and doing whatever it takes for the team to win," Allen said. "I mean, as far as game planning, obviously having a shooter out there will space the floor, but at the end of the day I just want to do whatever helps the team win."

The Cats will also get a boost with the return of Keion Brooks Jr. on Saturday. Ironically, Brooks' last action came in UK's game at Florida last season, when Brooks played a career-high 27 minutes and scored 10 points as the Cats rallied to win what turned out to be their final game of the season.

Assistant coach Jai Lucas tempered the expectations for Brooks as he comes back from injury.

"We'll just kind of wait and see," Lucas said. "He had a good practice yesterday. And it's hard because he hasn't been necessarily practicing. He's been doing some conditioning and stuff like that and we're going right into at Florida. I think that might have been his last game 10 months ago that he actually played was at Florida. I do think he'll get in a little bit in the game and we'll just kind of go from there. We're not expecting much from him."

Florida is 5-3 on the season and 2-1 in the SEC. The Gators will be coming off their first SEC loss of the season, an 86-71 setback at Alabama on Tuesday. Florida opened league play by winning at Vanderbilt 91-72 and beating LSU 83-79 in Gainesville.

The Gators remain without their best player, Keyontae Johnson, who collapsed during a game earlier this season and has not returned. Johnson was the preseason SEC Player of the Year prior to this season.

Lucas knows Florida can pose problems for the Cats.

"They're good. They've got good guards," Lucas said "They do a good job at spreading the floor and trying to create mismatches in that sense of finding somebody that they think they can attack. The big kid, the transfer from Michigan, Colin Castleton, has been playing really good. They've done a good job at getting him the ball. I think a big thing for us is are we going to be able to guard the ball and stay in front in one-on-one defense? So, we've just been preparing for that."

The emergence of Allen, the resurgence of Sarr and the addition of Brooks have the Cats feeling good as they visit Gainesville for a tough test on Saturday.