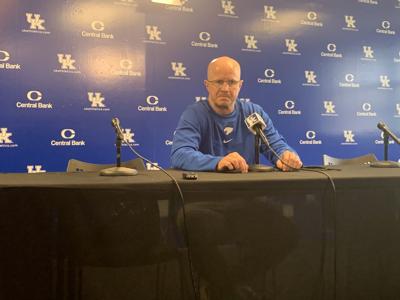 (LEXINGTON, Ky.) – Kentucky Volleyball faces a huge challenge this weekend. It’s the kind of challenge that has both players and coaches primed for battle. You’re on the road, behind enemy lines in hostile territory, and facing a formidable top-ranked foe.

“Oh yeah, I’ll be ready,” Coach Craig Skinner said at his meeting with media to preview the contests. “It won’t take much to be ready this weekend.”

On Friday night, Skinner’s Cats (5 – 1) travel to Madison to take on the undefeated (4 – 0) and No.2-ranked Wisconsin Badgers (9 pm ET, Big Ten Network). Then on Saturday night, it’s no rest for the weary as Kentucky faces another undefeated (6 – 0) and talented squad in Marquette (7 pm ET, Big East Digital Network, FLOsports).

Skinner, entering his 17th season and fresh off the school’s first national championship run knows it’ll be loud at a volleyball mecca like Wisconsin. But, by and large, Skinner explained that volleyball crowds are certainly enthusiastic—but relatively docile—compared to those found at typical basketball and football venues.

“They called me the bus driver or something,” Skinner answered, when asked what the worst thing he’s ever been called during a match. “[They’ll say things like] ‘Sit down, Coach.’ Occasionally you’ll get some stuff, but I would say it’s a pretty classy environment for the most part.”

Wisconsin is a team with a lot of returning experience. The Badgers, coming off another Final Four appearance, feature 6’8” middle blocker Dana Rettke, a four-time first-team All American. You can’t really stop a talent like Rettke, but Kentucky does hope to contain her.

“With a step ladder,” Skinner joked. “She’s going to get kills. If she goes off and has 25 kills and everyone else doesn’t have one of their best nights, then we’ve got a chance to come away with a ‘W.’ If she has 25 kills and everyone else has 15 to 20 kills too, then we’ve got a problem…We have to figure out some serving strategies that can maybe limit the number of chances she has to kill the ball.”

How Kentucky defends Rettke and how the team responds to the road environment will be the keys to victory on Friday night. Kentucky delivered in their previous road trip to Dayton. However, it’s still a bit too early for Skinner to guarantee how his young team will react this time around.

“I think typically in the past, our players have loved and relished the opportunity of playing matches like that,” Skinner said. “So, I’m expecting the same.”

If not exactly a homecoming, Wisconsin provides a huge dose of nostalgia for Skinner. At twenty-four years old, it was his first coaching job. At the time, the Badgers were at the bottom of the Big Ten and had to learn how to build a program. By the time Skinner left, the team had played in the Sweet Sixteen. Since then, Wisconsin moved on to even more success, winning a conference championship and becoming a national power.

As always, there can only be one victor. Let’s hope the bus driver delivers the goods.

Dr. John Huang is a columnist for Nolan Group Media and editor-in-chief of JustTheCats.com. His new book, CUT TO THE CHASE, is now available on Amazon. His newest Kentucky Basketball book, KENTUCKY PASSION, is scheduled for an October 19th release. If you enjoy his writing, you can follow him on Twitter @KYHuangs.