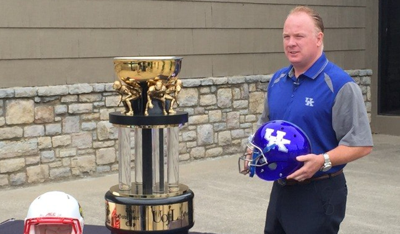 The pandemic took away a lot of things and the Governor’s Cup was one of its casualties.

Kentucky and Louisville had played football on a yearly basis since the rivalry was renewed in 1994 but the two programs didn’t play each other because both schools were forced to play a conference-only schedule last year. Both programs waded through uncharted waters in the Southeastern Conference and Atlantic Coast Conference.

Since they last met two years ago, when the Wildcats dealt the Cardinals a 45-13 setback at Kroger Field on Thanksgiving weekend in 2019, the architect of the modern-day series — Howard Schnellenberger — passed away at the age of 87 last March. Schnellenberger played at Kentucky and later served as the coach at Louisville for 10 seasons. He coached in the first game between the two rivals in 70 years in 1994, won by the Wildcats, 20-14. It was the only game Kentucky won that season.

At the beginning of the revised series, Kentucky and Louisville played each other in the season opener before conference realignment forced the two programs to move from the front of the schedule to the regular-season finale. Most teams in the SEC now play their rivalry games at the end of the season. This weekend alone, Ole Miss plays Mississippi State, Florida State takes on Florida, Georgia will play Georgia Tech, Alabama and Auburn go head-to-head, while Tennessee and Vanderbilt will battle for state bragging rights in the conference finale for both teams.

That’s the way it’s been for Kentucky and Louisville since 2014 and the change, at last for the past five years, has been in Kentucky’s favor. The Wildcats have won three of the last four games in the series, including back-to-back lopsided victories. Kentucky has outscored Louisville 101-23 and easily defeated the Cardinals 45-13 in coach Scott Satterfield's debut two years ago at Kroger Field.

In a way, the resumption of the series is like starting over. Kentucky coach Mark Stoops admitted some of the players “don’t understand it yet.”

“A good dose of our team, the past two classes haven't played Louisville, so this rivalry needs to be introduced to a few our players that haven't been exposed to it and it's a totally different team than two years ago,”  Stoops said earlier this week. “... I'll say this, this is definitely a different (Louisville) team and a different defense than two years ago when we played them.”

The future of the series is a concern considering Texas and Oklahoma will be joining the SEC within the next four years, giving the league 16 teams and the possibility of each conference member playing nine league games or more. For the record, Kentucky and Louisville are scheduled to play each other for the next nine years, but things can change over the course of the next few years.

In addition to bragging rights, the stakes are high for Kentucky, which will be looking to achieve a nine-win season for the second time in four years and just the fifth time in school history.

“I think that's pretty important and more than likely a (chance to play in a) New Year's Day bowl game,” Stoops said. “That's important, so there's a lot of things that our players need to understand the importance of it.”

Although it’s been two years since they have played each other, the rivalry is still very much alive and well.