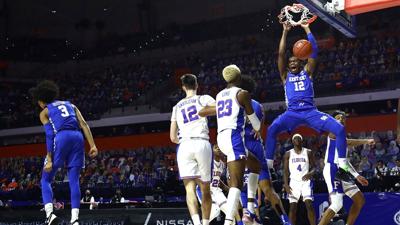 GAINESVILLE, Fla. - In his first game of the season, Keion Brooks Jr. scored 12 points on 6-for-8 shooting and Kentucky more closely resembled its No. 10 pre-season ranking by throttling Florida 76-58 on Saturday.

Brooks is the only returning scholarship player who played last season, and only until last week was he medically cleared to return to competition after missing the first nine games of the season with a left leg injury.

Although he'd been conditioning and participating with the team in non-contact drills, Thursday was his first full practice since the injury.

Though topping 70 points for the third straight game, the Wildcats exerted high energy on the defensive end and held Florida to 37.5% shooting (21 for 56) and scored 25 points off 16 Gators turnovers.

Brandon Boston Jr. and Davion Mintz each scored 13 for Kentucky and Olivier Sarr 10.

Kentucky has won three straight and will ready itself to play Alabama (9-3, 4-0) in an early-conference matchup for the top spot in the SEC on Tuesday.

Kentucky: Will get a chance to further test itself on Tuesday night against Alabama in Tuscaloosa.

Not Much to Cover in January City Council Meeting