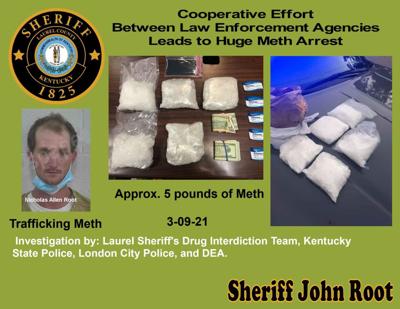 A joint investigation initiated by the Laurel County Sheriff’s Office Narcotics Interdiction Team assisted by the Kentucky State Police , London City Police, and the London Office of the DEA (Drug Enforcement Agency) resulted in the seizure of approx. 5 pounds of methamphetamine, suboxone, and U.S. Currency and the arrest of one individual. During a traffic stop conducted on Hal Rogers Parkway in London , an investigation was conducted by Laurel Sheriff’s Deputy Justin Taylor , Deputy Landry Collett , KSP Trooper Brian Maupin utilizing his K-9 “Gunner”, and London Police Officer Logan Medlock . As the investigation continued ,the K-9 alerted on the white Chev. Silverado driven by the suspect. Subsequently, approx. 5 pounds of suspected methamphetamine was discovered. Arrested was:

This individual was lodged in the Laurel County correctional center. Photo of accused attached to this report.

Laurel County Sheriff John Root stated that this cooperative effort between the Laurel County Sheriff’s Office Narcotics Interdiction Team, Kentucky State Police, London City Police and London Office of the DEA illustrates the success agencies can achieve working together. The “War on Drugs” will be continuing in Laurel County.

A Portion of KY 3444 (Jackson County) will be closed beginning Thursday, December 2

New Years Even Teen Lock In at LC Rec Center