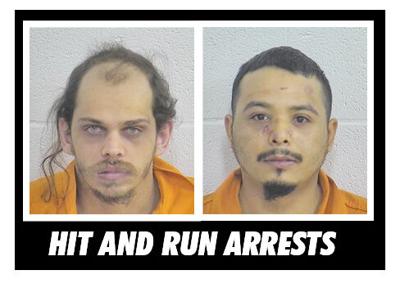 Laurel County Sheriff John Root is reporting that: Laurel Sheriff's Deputy Brent France along with K-9/ shift Sgt. Gary Mehler, Deputy Travis Napier, Deputy Dustin Saylor, and Deputy Marcus Stigall arrested two subjects on Hal Rogers Parkway approximately 2 miles east of London after Deputy Brent France was flagged down by a motorist advising that a black Chevrolet truck had hit a vehicle at a gas station and left the scene. Deputy France traveled out East Hal Rogers Pkwy. and located the suspect vehicle- a black Chevrolet Silverado- and conducted a traffic stop determining that the driver was under the influence. It was also determined that this vehicle was the hit and run vehicle. During the arrest and custody of the driver – suspect – this individual scuffled with deputies and attempted to kick out the Windows of the police cruiser continuing to be combative the entire trip to the detention facility. At the detention facility this individual continued to be combative.