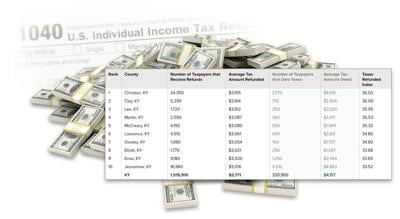 Clay County ranks as one of the top counties in the state on tax returns, according to a tax analyst website.

Smartasset.com recently released the top 10 counties in the state according to tax return amounts.

The new tax deadline has been extended to May 15th.

To determine the counties that received the highest average tax refunds in Kentucky, Smart Asset’s study divided the total amount of money refunded to residents by the IRS by the number of refunds distributed in each county.

Gov. Beshear: Starting May 28, All Events and Businesses Catering to 1,000 People or Fewer Can Increase to 75% Capacity