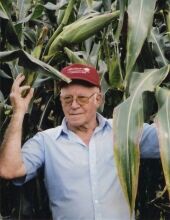 He was preceded in death by the following: his wife, Lorraine Davidson Mobley; biological parents, John and Bertha Mobley; and his adopted parents, Floyd and Martha Mobley. He was also preceded by his brother, George Mobley, and two sisters: Drucilla Mobley Madden and Lita Marie Mobley Campbell.

Lee Mobley Neace. He is also survived by nieces, nephews, friends, and neighbors who mourn his passing.

Clinton served his country during World War II as a member of the United States Army Infantry, in the European Theatre of Operations. He worked at several professions to support his family including farming, mail carrier, factory worker, stonemason, Kentucky Department Transportation, and United States civil servant, Bluegrass Army Depot.

Clinton was a man with strong faith and an ordained evangelist for the Church of Christ.

Services will be held at 2:00 PM on Friday, October 30th at Britton Funeral Home in Manchester, KY, with Steve Young officiating. Burial will follow in the Estill Davidson Cemetery at Oneida.

Visitation will be held from 1:00 PM to 2:00 PM on Friday, October 30th at Britton Funeral Home in Manchester, KY.

To plant a tree in memory of Clinton Mobley as a living tribute, please visit Tribute Store.
We need your support

Over 350 COVID cases reported this month

Drug runners caught on way back from Louisville