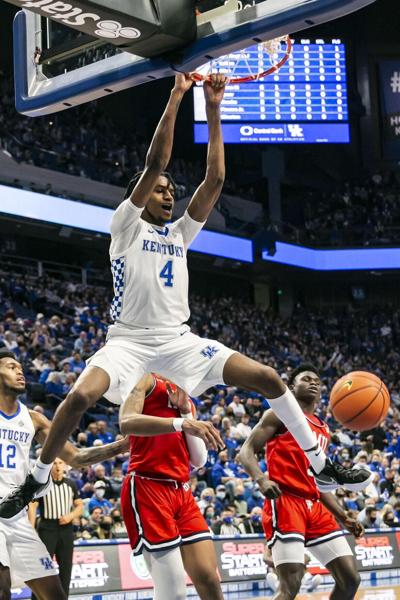 LEXINGTON, Ky. (KT) — It was a fun night for Damion Collins.

The freshman forward scored 14 points, grabbed six rebounds and collected four blocked shots, and helped lead Kentucky to a 100-60 win over Robert Morris Friday night. It was a performance that may have vaulted Collins into the team’s rotation.

“It was really fun,” Collins said. “You’ve got to have fun during the game. My whole team was happy and playing hard.”

The Wildcats (1-1) needed a feel-good performance following a 79-71 setback to Duke earlier this week in the Champions Classic in New York. Collins played just 1:25 against the Blue Devils and had a foul and a turnover during his brief stint in the opener.

“He needs to play,” Kentucky coach John Calipari said. “I questioned whether I should have played him more in the Duke game, and I told the team, you do understand if he plays more, what that means. … we need him in the game, even if it’s 20 minutes. He needs to play.”

In addition to the breakthrough performance by Collins, Kentucky placed six players in double figures, led by Kellan Grady with 19 points. Oscar Tshiebwe had another double-double with 14 points and 20 rebounds for the second consecutive contest. He also had 20 rebounds in his Kentucky debut against Duke earlier this week.

Two games into his collegiate career, Collins has found a source of energy through his veteran teammate, Tshiebwe.

“He’s the same way in practice,” Collins said of Tshiebwe. “Him going hard and bringing a lot of energy — that makes everybody else go hard too. Everybody on the court has to have the same energy. He brings energy like that, it helps everybody else’s energy.”

Tshiebwe was happy with his own contributions but was glad to see Collins step into the limelight on the team’s official home opener.

“Damion did good,” Tshiebwe said. “I’m proud of that kid, he did good. We need energy like that and we need everybody to be ready to do like Damion did today. We’re happy for him.”

Kentucky was without Jacob Toppin, who is battling a shoulder issue and Lance Ware, also battling a nagging injury, and needed a lift from Collins off the bench.

“One man’s misery is another man’s opportunity,” Calipari said.

It took Collins a little longer to adjust to the speed of the game, but he’s starting to turn the corner at just the right time.

“It’s more comfortable now,” Collins said. “It’s way more physical than high school. If you don’t go at someone and be real physical first, you’re going to get pushed around.”

He certainly made his presence felt Friday night and made a case for more playing time in the near future.