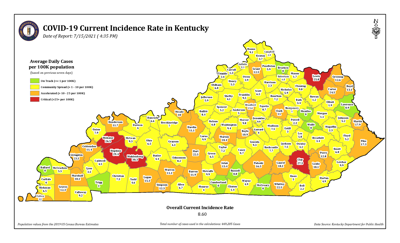 Clay is one of five counties in the state that have entered the red due to COVID cases.  The county’s positivity rate is now at 27.3%.

According to the Cumberland Valley District Health Department, a cluster of cases associated with services at the Church of God Worship Center at Laurel Creek has been reported.

The church held revival services last week and the department is currently tracking 16 confirmed cases that are associated with the cluster, according to Christie Green, Public Health Director at the CVDHD.

“There are also cases among individuals who attended services but live-in other counties,” Green said.  “But I am unable to confirm exact numbers outside of our jurisdiction at this time.”

Some of those testing positives at the church have previously been vaccinated.  Health officials nationally believe this is probably the Delta variant, a highly contagious SARS-CoV-2 virus strain, which was first identified in India in December and is now in the United States.

Green says the church responded properly when the first case was reported.

“We appreciate the way the church leadership has responded to this outbreak,” she said.  “They have taken steps to alert the congregation and cancel services, which is helping to minimize the spread of COVID.”