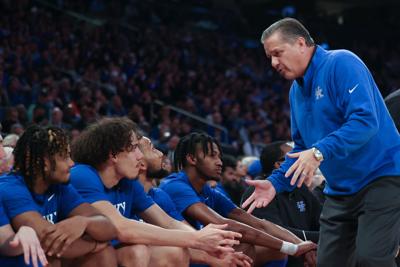 (NEW YORK, Ny.) – Immediately after Christian Laettner hit the game-winning dagger in ’92, many passionate Kentucky basketball fans began referring to the Duke Blue Devils as public enemy No. 1. The team from Durham not only ended the Unforgettables’ magical run that season, but over the years, Mike Krzyzewski and crew managed to “steal” a couple of more national championship banners that Wildcat fans think rightfully belong in the rafters of Rupp Arena.

How fitting, then, that Big Blue Nation got the opportunity to open the Coach K Farewell Tour by exacting revenge in the world’s most famous arena on the biggest college basketball stage imaginable.

Not so fast, my friend.

The final box score showed that Oscar Tshiebwe and Sahvir Wheeler both had double-doubles for Kentucky on this particular night. Tshiebwe scored 17 points and pulled down 19 rebounds. Wheeler added 16 points and dished out 10 assists. However, it wasn’t enough as No. 9-ranked Duke defeated No. 10-ranked Kentucky 79 – 71 in the State Farm Champions Classic in Madison Square Garden.

The Wildcats scrapped their way back from a 39 – 35 halftime deficit against their bigger opponents. They actually grabbed the lead early in the second half before Duke started hitting shots to save Krzyzewski’s 42nd and final season at Duke from getting off to a losing start.

Trevor Keels led all scorers with 25 points, and super freshman Paolo Banchero chipped in with 22 for the Blue Devils. Despite Tshiebwe’s presence, Duke ultimately controlled the paint while hitting only 1 of 13 shots from behind the three-point line.

Love him or hate him, there’s something to be said for Coach K’s longevity alone. Over four decades in the meat grinder of college coaching is nothing to sneeze at. To come away with five national championships, 12 Final Four appearances, and the mantle of “winningest coach in the history of the NCAA” puts you into pretty rarified air. Arguably, it should give you the outright moniker of “best ever.”

“It was just an amazing game tonight,” said the 74-year-old Krzyzewski. “I mean, it felt so good with the Garden crowd and playing against an outstanding team. I mean, they’re tough and we’re tough. It was a big-time game, really big-time, and our guys really fought through a lot of adversity.”

Krzyzewski’s counterpart, John Calipari, not only lags Coach K in stature, but also in age. At a spry 62, Calipari most likely has a few more victories left in him. At his current pace of racking up wins, the forward-thinking head coach is himself on track for college basketball legendary status.

“Give Duke credit,” Calipari responded after another opening season loss. “They kept us in pick and rolls, and again, I should have gone to forcing down the sideline earlier than I did. Not our kids’ fault. I told them after, that’s on me. But I loved our fight. I loved our competitive spirit. And that’s what our program is always about.”

There are a lot of similarities between the two coaching icons. Both Calipari and Krzyzewski have shown an uncanny ability to look to the future, adapt to what’s coming, and flipping the switch when needed. Both are equally adept at running individual practices as well as multi-million-dollar athletic empires. Coach Cal and Coach K both understand the importance of interpersonal relationships and the responsibility of mentoring young men.

If truth be told, the biggest difference remaining between the two coaching giants is the glaring discrepancy of national titles won. Say what you want about players in the NBA and your program being the gold standard, until Calipari garners another ring (or two) on his fingers, he and Krzyzewski really can’t realistically be mentioned in the very same breath.

Kentucky fans hope Calipari can close the championship gap this upcoming March. Regardless of all the individual talent that spilled onto the Madison Square Garden court, Kentucky should be a significantly better team when tournament time rolls around. But Duke will be better too. What a treat it would be for everyone if the two marquee programs and their legendary hall of fame coaches went at each other one final time for all the marbles.

“I’m hoping this isn’t the last time we play them, so don’t make any mistake about that. I hope we play them one more,” Calipari said in the leadup prior to Tuesday night’s contest.

With the way the two teams battled on the court, you’d be hard pressed to find anyone in college basketball who disagrees.

Dr. John Huang is a columnist for Nolan Group Media and editor-in-chief of JustTheCats.com. His two newest books, KENTUCKY PASSION and FROM THE RAFTERS OF RUPP, are now available online and wherever fine books are sold. If you enjoy his writing, you can follow him on Twitter @KYHuangs.