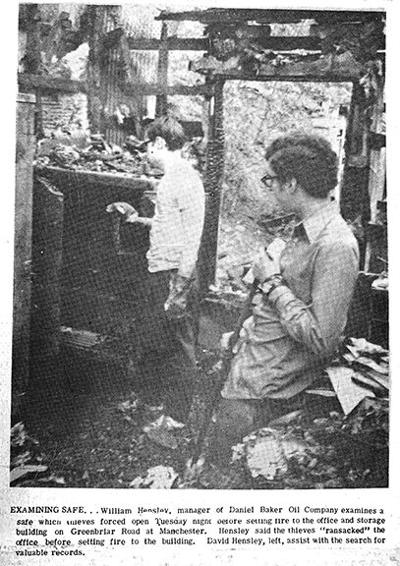 Firemen fought the flames about four hours early Wednesday to keep the inferno from spreading to six huge gasoline storage tanks immediately behind the building.

Lester Hensley, president of the company, which distributes Shell Oil Products in this area, estimated the damage would reach $25,000.  He said the fire was apparently set by thieves who forced entry into the building sometime Tuesday night then ransacked a safe and filing cabinets.

It was believed they were seeking money, which was not kept in the building at night.

Fire chief Joe Jones said the fire department was notified of the fire about 4 a.m. Wednesday and that the fire had completely engulfed the office building when firemen arrived.

“Flames,” he said.  “was going out both ends and were soaring 50 feet high and within about 20 feet of the storage tanks.”

Firemen struggled to keep the flames from igniting the gasoline, he added.

Barrels of oil and grease, stored in the burning building, posed a danger to the 25 firemen fighting the fire, poured over 200,000 gallons of water on the flames.

Because of their efforts, only one of approximately 20 of the 55 gallons of oil in the structure exploded.

“When it went large billowing flames shot 100 feet skyward,” assistant fire chief Ray Rice said.  “But fortunately, none of the firemen were hurt.”

In their intense effort to cool the structure, firemen moved to within 20 feet of the flaming structure and sprayed water from six hoses on the flames.  Both of the city’s fire trucks were called into action.  Their effort also saved a new oil truck purchased this week by the company that was in the fire when they arrived.

Hensley said some of the records in the company could be salvaged because of the large amounts of water firemen sprayed on the office corner of the building which was next to the storage tanks and that many of the credit card tickets collected from stations here had been salvaged.

“But many of our records are lost and may never be straightened out,” Hensley said.

He was scheduled to contact Shell Oil Company later today and inform them of the disaster.

He said the company could continue to operate and would set up temporary offices in a small one-room shack nearby.

“The gasoline was saved and we have a new load of oils arriving later this week,” Hensley said. “Insurance coverage on the building will not cover the loss.”

William Hensley, manager of the company, was scheduled to take inventory of the damage sometime Wednesday afternoon and set a figure on the entire loss.

The incident marked the second major fire for the company which was destroyed in 1961.  It was then located in East Manchester.

The new plant had been constructed under strict state fire regulations.

The owner also expressed deep gratitude for the efforts of the fire department.

(Editor’s Note: This story originally appeared in the June 3, 1971 edition of The Manchester Enterprise.)