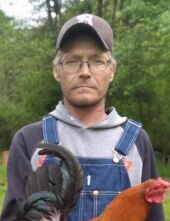 David was born in Manchester, KY on April 30, 1983, a son of Robert Couch and the late Nancy Smallwood Couch.

David is survived by his father Robert Couch, his daughter Nancy Jo Couch, and two brothers: Chris Couch and Robert Couch, III, all of Orlando, KY.

Services will be held at 11:00 AM on Friday, July 23rd at Britton Funeral Home. Burial will follow at the Couch Cemetery in Orlando, KY.

Visitation will be held at 6:00 PM on Thursday, July 22nd at Britton Funeral Home.

To send flowers to the family of David Couch, please visit Tribute Store.
Help us serve you better!